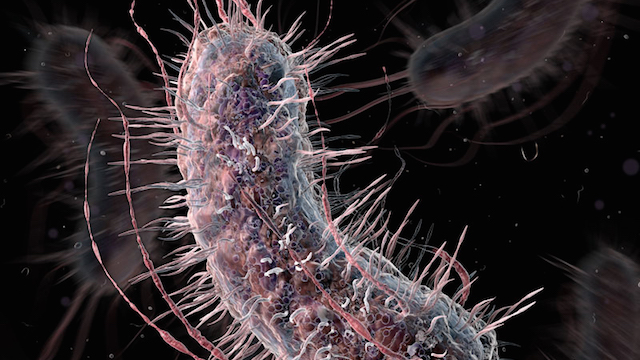 CHRIS BICKEL, SCIENCE TRANSLATIONAL MEDICINEThe technique: Researchers at MIT and the University of California, San Diego, have programmed a probiotic Escherichia coli strain to detect cancer metastases in the liver. The team used these bacteria, described this week (May 27) in Science Translational Medicine, to detect cancer in mice.

“There are so many bacteria in our own bodies,” said lead author Tal Danino, a postdoc in Sangeeta Bhatia’s lab at MIT. “In some ways, they are a very natural delivery vehicle for agents for diagnosis.”

The new diagnostic technique takes advantage of an old finding: bacteria thrive in tumors. Tumors are filled with nutrients released from dying cells and relatively free of immune cells. So the researchers fed the engineered E. coli to mice and found that the bacteria indeed homed to liver tumors and multiplied.

The gastrointestinal tract is connected to the liver through the...

To make the E. coli signal their presence, the researchers engineered the microbes to express high levels of β-galactosidase — an enzyme that helps E. coli digest lactose. They then injected the animals with LuGal, a conjugate of the bioluminescent protein luciferin and galactose. The enzyme β-galactosidase cleaves LuGal, freeing the luciferin. The molecules are then excreted in mouse urine. When the researchers add luciferase to the urine, its interaction with luciferin releases light. The researchers demonstrated that, by measuring how brightly urine glowed, they could determine whether mice had cancer in their livers.

The significance: “This is a wonderful example of using synthetic biology for a medical goal,” said Neil Forbes, a professor of chemical engineering at the University of Massachusetts, Amherst, who is working independently to program microbes as cancer diagnostics and therapies.

After further adaptation and safety testing, the researchers hope to use their engineered bacteria to monitor potential metastases in cancer patients. Many cancers, including colorectal cancer and breast cancer, metastasize to the liver. Metastases to the liver can be surgically removed or otherwise treated if they are small enough, but doctors often catch them when they are too large and widespread to be removed.

The team’s “novel strategy presents a powerful, simple to use, and safe diagnostic, that may be applied to many solid cancers,” Mark Tangney, a cancer researcher at University College Cork in Ireland who was not involved in the work, wrote in an e-mail to The Scientist. Tangney studies the microbiomes of cancers and previously showed that orally administered bacteria can make their way from the gut to tumors in mice.

What’s new: Multiple groups over the years have attempted to harness the affinity of microbes for cancer, testing them as anti-cancer therapeutics or as markers for diagnostic imaging. However, most studies in animals and humans to date have relied on intravenous administration of bacteria.

Oral administration is safer and more practical, particularly for a diagnostic that will likely be used more than once. “When you orally [administer] these bacteria, they reach the liver, and the liver filters them,” said Danino. “It prevents the bacteria from reaching high levels in the bloodstream.”

And because the team chose to use a bacterial strain that is already prescribed as a probiotic to patients with gastrointestinal disorders (E. coli Nissle 1917), safety concerns are reduced.

Needs improvement: It remains to be seen whether oral probiotics can make their way to liver tumors in humans, as the organs differ between mice and people. The researchers intend to first improve the sensitivity and specificity of their test and gather further safety data, before moving it into clinical trials.

The researchers also hope to determine whether engineered probiotics could be used to diagnose other cancers. James Collins, a synthetic biologist at MIT who was not involved in the study, noted that if the engineered bacteria didn’t make their way to a certain tissue naturally, they might, perhaps, be engineered to express receptors that would target them to tissues. “The power of engineering can be really nicely applied to biology with clinical goals in mind,” said Collins.