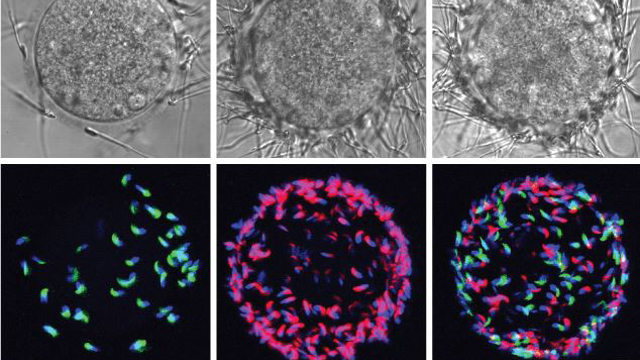 Green fluorescently tagged sperm, released from epididymis (left), red-tagged sperm after incubation (middle), or mixed (right) binding to the zona pellucida of a mouse oocyte in vitroSCIENCE TRANSLATIONAL MEDICINE, M.A. AVELLA ET AL.The device: Researchers have created peptide-coated agarose beads that bind mouse sperm in vitro and in vivo, as well as human sperm in vitro, according to a study published today (April 27) in Science Translational Medicine. When transplanted into the mouse uterus, the sperm-binding peptide–coated beads prevented fertilization for more than two months, after which the female animal was again fertile.

In vitro, human sperm that reversibly bound to similar peptide–coated beads resembled the male gametes normally selected to have the greatest capacity to bind and fertilize human oocytes.

“You can have anything go wrong in this whole process, but they got it to work and that is surprising and very impressive,” said Deijan...

Mammalian oocytes and preimplantation embryos are coated with a multi-glycoprotein membrane called the zona pellucida. Researchers at the National Institute of Diabetes and Digestive and Kidney Diseases (NIDDK) and their colleagues coated inert beads with either mouse or human peptides of one of these glycoproteins, called ZP2, which is required for prefertilization sperm-oocyte interaction. Using male mice expressing fluorescently tagged sperm, the researchers observed that the complexes could attract and bind sperm both inside the uterine horns of female mice and in a dish in the presence of intact oocytes.

“The combined use of multiple fluorescent transgenic mice really helps tease out the location and activity of the sperm in a very elegant way,” Lee Smith, a professor of genetic endocrinology at the University of Edinburgh, U.K., who was not involved in the work, wrote in an email to The Scientist.

The significance: “This is a very exciting development for contraception and in vitro fertilization research,” Smith noted. “What it shows, very clearly, is that we have reached a watershed in our understanding [of the zona pellucida] such that we can take this accumulated knowledge and develop this into unique applications.”

The peptides could potentially be used both as part of a novel contraceptive device and to test the fertilization competency of human sperm for assisted reproduction. “There is a continued need to give people better reproductive choices, both for increasing fertility and avoiding procreation which are really two sides of the same coin,” said study coauthor Jurrien Dean of NIDDK.

Dean said he hopes that fertility clinics will now want to test the selection of sperm for assisted reproduction using his team’s peptide-coated beads works.

“This is an almost immediate application,” said Ren.

What’s new: Dean’s lab had previously identified ZP2 as the key sperm-binding protein within the oocyte’s zona pellucida, pinpointed the region of the glycoprotein necessary for binding, and showed that either murine or human peptide–connected beads could attach the respective mammalian sperm in vitro. For the present study, the researchers demonstrated two potential applications of the ZP2 peptide–bead complex.

When implanted using a transcervical device into female mice, the peptide-coated beads work as reversible and long-term contraception without inducing any overt harm or detectable inflammation for more than two months, the team reported. In a dish, human sperm that bound to the peptide-bead complexes displayed a better ability to bind and penetrate the zona pellucidae of mouse eggs expressing human ZP2 in vitro.

“The concept of attracting and/or decoying sperm by flooding the local area with attractive ZP2 proteins to bind is novel and, intriguingly, the approach has the dual benefits of showing promise both for selection of the best sperm in men with subfertility and as an enhancement to currently available contraceptives,” noted Smith.

Needs improvement: While the “long-term contraception in mice is an excellent proof of principle,” wrote Smith, there are many unanswered questions.

Safety and efficacy tests are needed should researchers pursue the potential contraceptive application, and scientists ought to evaluate different ways to deliver and retain the peptides, Dean told The Scientist. “I strongly suspect that attaching peptides to beads is not the way to administer this in a clinical setting,” he said. “A lot more development is needed before this is ready for prime time.”

Ren agreed: “The major advantages over current contraception options are not yet clear.”