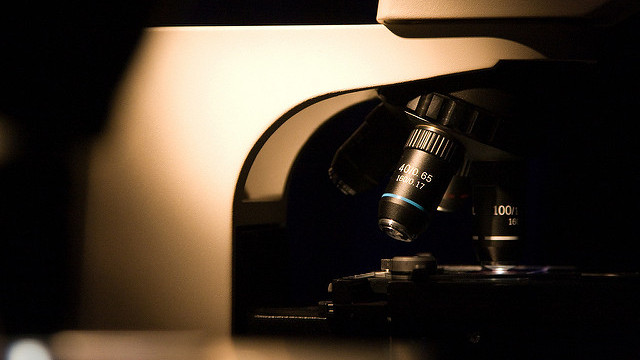 FLICKR, MILOSZ1The technique: The average charge-coupled device (CCD) camera mounted on a fluorescent microscope can take images every 100 milliseconds (ms). But what if a fluorescent protein being studied moves faster than that? A new phase-manipulation technique developed by a group of engineers at Rice University in Houston, Texas, can now resolve the dynamics of such fast-moving proteins without the need for an expensive, faster frame-rate camera. The group described its optical hack last month (October 24) in The Journal of Physical Chemistry Letters.

The researchers “have developed a new method to extract single-molecule dynamics that are 20 times faster than the timing imposed by [CCD] camera frame rates,” Julie Biteen of the University of Michigan, who was not involved in the research, wrote in an email to The Scientist. “This is important because in my lab, for instance, we consider the dynamics of proteins inside living...

The new approach “is totally compatible with all the existing methodologies [of super-resolution microscopy] and in particular all the existing equipment, so it’s just an elegant way to get out faster information,” she added.

The background: Super temporal-resolved microscopy (STReM) works by manipulating the properties of light to gain additional information, said Christy Landes of Rice University who led the method’s development. “With light, you have the intensity (how strong it is), the color (that’s the wavelength), and then you have the wave direction (that’s the phase information),” she said. Most cameras detect only intensity and color to produce 2-D images, Landes explained, but if they can also be made to detect wave direction, then those 2-D images can yield more data.

Indeed, scientists previously developed a tool, called a double helix phase mask, which interferes with the light emitted from a sample such that it is possible to gain information about the 3-D arrangement of single fluorescent molecules. Landes and colleagues have now utilized that same double helix phase mask to instead gain information about time.

When a single fluorescent molecule is viewed through a double helix phase mask, it appears as a doublet of bright spots, rather than one. If the observed sample is 3-D—a cell, for example—the position of the molecule in the z-axis can be determined by the orientation of the doublet because, as the focus point of the microscope moves through the sample, the doublet appears to rotate (creating a helical trajectory).

What’s new: To gain temporal instead of 3-D information, said Landes, two things must happen. First, the researcher must observe a thin—essentially 2-D—slice of the 3-D cell. This can be achieved by illuminating the sample at an oblique angle (a technique called total internal reflection fluorescence, or TIRF). Second, the double helix phase mask itself needs to be rotated at a speed corresponding to the exposure time of the camera. By this method, the orientation of a doublet in the resulting image relates, not to the molecule’s 3-D position, but to the time within the 100 ms exposure at which it was captured.

“We have to give up 3-D [information]” to get the time information, said Landes, but a lot of dynamics can happen in what is essentially a 2-D slice. For example, she said, “on the scale of super-resolution, a cell membrane is practically 2-D.”

As a proof of principal, Landes and colleagues imaged the adhesion and release of fluorescently labeled proteins to a glass coverslip with a time resolution of approximately 5 ms.

“In the still image you actually see some temporal dynamics that you wouldn’t be able to catch otherwise,” said Matthew Lew of Washington University in St. Louis, who did not participate in the project. “It’s a really neat way of getting high temporal resolution with existing technology.”

The cost: To make the double helix phase mask spin, the device was simply affixed to a rotary mount at a cost of a few hundred dollars, said Landes.

It is possible to purchase high-tech cameras with faster frame rates, said Biteen, but they can be prohibitively expensive, and “not every problem warrants a $100,000 solution.”