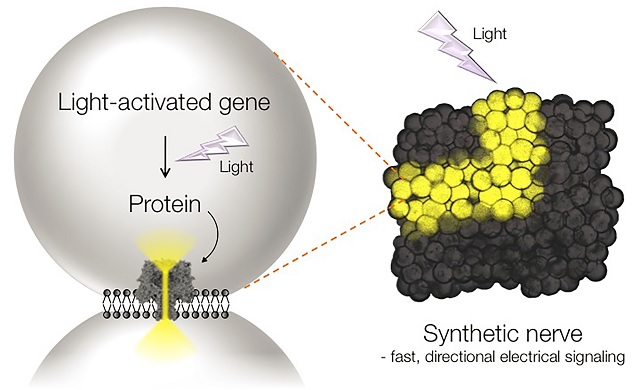 The device: Researchers at the University of Oxford, U.K., have engineered a soft, tissue-like material, built from hundreds of DNA-containing synthetic cells, that can transmit an electrical signal, according to a study published today (April 1) in Science Advances. The expression of genes in each “cell”—a 3-D-printed water droplet surrounded by a single layer of lipids—is light-activated, giving the researchers precise control over the behavior of the material.

“It’s really beautiful work,” said Sheref Mansy, a biochemist who builds cells from scratch at the University of Trento, Italy, and was not involved in the research. “It’s fantastic to be able to show the ability to arrange these synthetic cells so precisely, with...

Each lipid-encased droplet has a volume of 50 picoliters to 100 picoliters, and contains the simplest set of genes needed to make a transmembrane pore protein—a channel through which small molecules can pass—that spans the lipid bilayer formed between adjacent droplets. Synthesis of this protein is regulated by a light-activated DNA promoter, meaning that pores are only produced (and, therefore, electrical signals are only transmitted) when a droplet has been illuminated. 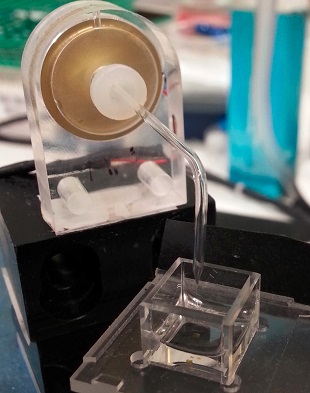 A 3-D printer builds the tissue by printing layers upon layers of lipid-encased water droplets.MICHAEL J. BOOTHThe significance: Printing 3-D assemblages of these droplets is “a brilliant idea,” Stephen Mann, a chemist who designs protocells at the University of Bristol, U.K., wrote in an email to The Scientist. The work “should provide a first step towards a functional mimic of neuronal transmission,” he added.

The hope is that such materials might one day be able to interact with—or even replace—living tissue. “For example, in nerve regeneration where there is spinal cord injury, it might be possible to bridge that gap initially with these artificial materials,” said study coauthor Hagan Bayley of Oxford.

The ability to control communication between synthetic cells also offers other potential biomedical applications. “We could, for example, have a binary drug delivery system where we have a prodrug in some compartments and an activator, like an enzyme, in other compartments,” Bayley explained. “When they reach the target, they mix and the drug is generated at the target. This would be very useful for short-lived, reactive effectors which are found in the body but can’t be put in a pill or an IV drip.”

What’s new: The Oxford team had previously printed 3-D, tissue-like materials from lipid-encased droplets, and other groups had made progress toward using in vitro transcription and translation systems to make proteins in one or a few synthetic cells.

“What we’ve added on top of this is control by light,” said study coauthor Michael Booth, a postdoc in Bayley’s lab who led the research, “and we’ve shown that you can connect these synthetic cells or compartments together to have communication between more than two.”

In order to make the material, Booth also had to design a new droplet recipe, as previous droplets became unstable with the addition of the molecular machinery needed for protein synthesis (they would burst or fuse rather than form tissue). Booth trialed many lipid compositions to find one that allowed pore synthesis and remained stable. “That’s not something that’s super easy,” Mansy said. “Finding the formulation that does better is extremely useful.”

Needs improvement: Currently, these synthetic cells only communicate with other synthetic cells. “They can do many wonderful things and it’s a great foundational technology,” said Mansy, “but I would just love to be able to see interactions with living cells.”

There are several hurdles to overcome in order to reach that goal. First, the system currently works in an oil, rather than an aqueous, environment, which “could be a problem for interfacing with cellular tissue,” Mann wrote. Translating the techniques into an aqueous context is part of the team’s current focus. “It has been shown previously that you can get these compartments to be stable in bulk aqueous solution,” Booth said, “so it is possible to move in that direction.”

And because each droplet is surrounded by a single layer of lipids (rather than a bilayer like living cells), the protein pores being made to connect the droplets would not connect synthetic cells to living ones. With this in mind, said Bayley, “we’ve also been working on connecting these materials directly to natural tissues by using engineered protein pores that can span two lipid bilayers.”

Finally, the researchers plan to increase the system’s complexity, by expanding “the repertoire of proteins that can be expressed in these synthetic cells and tissues to give us more function than what we have already,” said Booth. “The idea is to make them more controllable at different stages, whether that’s the DNA stage, the protein stage, or even afterwards.”