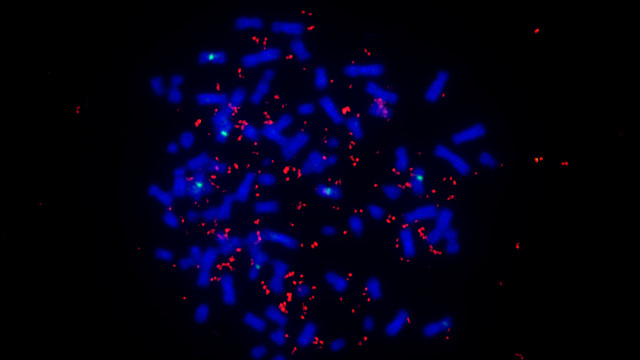 Metaphase spread of chromosomes (blue) and ecDNA encoding EGFR (red) from a glioblastoma cell line.KRISTEN TURNER, UNIVERSITY OF CALIFORNIA, SAN DIEGOGenetically, tumors are a mess. Individual tumor cells have a unique spectrum of mutations, and this heterogeneity is known to drive tumor evolution and resistance to cancer treatments. Now, in a study published today (February 8) in Nature, Paul Mischel of the Ludwig Institute for Cancer Research at the University of California, San Diego (UCSD), and colleagues report on another level of tumor heterogeneity: widespread non-chromosomal DNA—likely to be circular DNA—found in 40 percent of the tumor cell lines analyzed. This extra-chromosomal DNA (ecDNA) expressed multiple copies of oncogenes associated with drive tumor growth and survival. The finding suggests that this non-chromosomal DNA likely contributes to tumor heterogeneity and evolution.

“This is the first comprehensive study of the frequency of extrachromosomal DNA found in diverse cancer types,” Charles...

“This study provides yet another layer of dimensionality to how tumors permute their genomic material to become more aggressive and adapt to [anti-cancer] therapy,” said Levi Garraway, head of global oncology development at Eli Lilly, who also was not involved in the work.

“EcDNA was thought to be a minor, weird thing that happens in some tumors,” Mischel told The Scientist. “After our 2014 paper, we thought about how important amplification of oncogenes can be in cancer and realized that there may be a hole in our knowledge of the role of ecDNA in tumors.”

One of the reasons for the knowledge gap, according to Mischel, is that next-generation sequencing can quantify the number of specific sequences but cannot always accurately map them to a location, particularly if that location is not on a chromosome.

Kristen Turner, a postdoctoral fellow in Mischel’s lab, first quantified the prevalence of ecDNA among 2,572 cells from 117 patient-derived tumor cell lines, eight non-cancerous human cell samples, and 10 immortalized but non-cancerous cell lines. The team developed imaging software to detect the ecDNA among metaphase spreads—when paired chromosomes and ecDNA can be easily distinguished—of each cell type. The ecDNA was almost never detected in normal cells, whereas 40 percent of a variety of cancer types and nearly 90 percent of patient-derived brain tumor xenograft models harbored ecDNA. Within a given tumor, the frequency of ecDNA varied greatly.

“It’s striking that the authors found that almost half of the different tumor cell lines they analyzed contained ecDNA,” noted Rameen Beroukhim, a cancer researcher at the Dana-Farber Cancer Institute in Boston who was not involved in the work.

“We saw that all of the oncogenes were amplified either entirely on ecDNA or on both ecDNA and on the chromosome but not at the gene’s normal chromosomal location, suggesting that these [oncogenic repeats] may be quite mobile,” said Mischel. The team showed that this is indeed the case using one example: the progeny of a glioblastoma cell expressing a high copy-number of a mutated EGFR gene had the EGFR genes move from circular ecDNA onto chromosomal regions.

Co-led by computer scientist Vineet Bafna, the team next created a model to simulate how ecDNA become segregated among daughter cells. Because the ecDNA doesn’t contain a centromere—needed for attachment to the metaphase spindle and equal segregation—the ecDNA are segregated randomly, resulting in some cells with many copies and some with none. The simulations suggested that unequal ecDNA segregation during cell division resulted in a range of cells containing low to high numbers of ecDNA fragments. The model showed that this wide range of distribution contributed to the heterogeneity of the cells that make up a tumor. “We found that if an oncogene was on ecDNA, it could far more rapidly reach high levels and that those high levels would be maintained much longer than if it were just on the chromosome,” explained Mischel.

“The implications are that these ecDNA fragments will be far less stable across tumor populations than chromosomal amplifications and contribute to intercellular diversity and evolution dramatically,” Swanton wrote.

The next questions are how ecDNA behaves within patient tumors, and how this correlates with clinical phenotypes. “Longitudinal studies of cancers through the disease course will be necessary to determine exactly how flexible this process might be,” noted Swanton.

“A question that this study raises is how ecDNA arise in tumors in the first place and how the biology of tumors with oncogene amplifications on ecDNA differs from oncogenes on chromosomal DNA,” said Beroukhim.

The team is now observing the dynamics of ecDNA maintenance throughout multiple cell divisions in culture, said Mischel. “We think this [ecDNA] is an important aspect of how cancers evolve.”