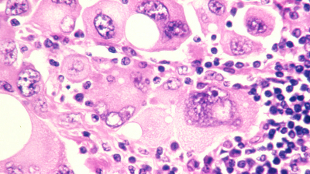 Human metastatic melanoma cellsWIKIMEDIA, NATIONAL CANCER INSTITUTEMutations in the regulatory, or non-coding, regions of the telomerase reverse transcriptase (TERT) gene—a cancer-associated gene that encodes a component of telomerase, an enzyme known to help protect the ends of chromosomes and support cell longevity—may be at the root of most melanomas, according to two papers published today (January 24) in Science.

In both studies, researchers identified mutations that created new binding sites in the TERT promoter for particular transcription factors and resulted in increased transcriptional activity at the TERT promoter, which may in turn lead to increased expression of the gene and the endless cell division characteristic of cancer cells. The findings suggest that mutations in regulatory parts of the genome, in addition to those in protein-coding sequences, may be a key mechanism causing the growth of certain types of cancer.

“I am excited by the finding that regulatory mutations can apparently act as drivers of carcinogenesis,” Elaine Mardis, a cancer geneticist and co-director of the Genome Institute at Washington University, Missouri, who was not involved in the research, said in an email. “This is great news for labs like ours that have always emphasized the importance of whole genome sequencing over exome or targeted sequencing.”

To see if tumor genomes also harbor mutations in these under-explored regulatory regions, Franklin Huang and Eran Hodis of Harvard Medical School and colleagues took a closer look at whole genome sequences of malignant melanomas published last May. Sure enough, they found two somatic mutations, which they called C228T and C250T, in the TERT promoter region in 71 percent of the tumors they analysed—making them more common than the known melanoma mutations in the coding regions of the genes BRAF and RNAS.

“The fact that these mutations occur so frequently near what is a very important gene in cancer development was unexpected, but it was staring us in the face,” said Hodis.

Intriguingly, both mutations generated an identical DNA sequence containing a transcription factor binding site, increasing the transcription of reporter genes linked to the TERT promoter by 2- to 4-fold. This led the researchers to propose that these promoter mutations may be driving melanoma development by increasing TERT expression, which is tightly regulated in normal cells. When TERT is over-expressed, cells produce elevated levels of telomerase, prompting the regeneration of chromosome-capping telomeres and resulting in cells that can divide limitlessly. Mutations that increase TERT expression could thus be expected to promote cancerous growth.

In a separate study, Susanne Horn of the German Cancer Research Center in Heidelberg and colleagues compared the whole genome sequences of tumors from a melanoma-prone family who did not carry two known germline mutations linked to melanoma, and identified a germline mutation in the TERT promoter in individuals with the cancer. Once again, the sequence change created a new binding pattern for certain transcription factors and increased transcription activity.

“[We think] the binding of transcription factors up-regulates the telomerase gene in the developing tumors,” Horn said. “High levels of telomerase may then lead to cells that can divide more often.”

Horn and her colleagues also screened the TERT promoter in 168 cell lines derived from metastatic melanomas from the general population, and found recurrent somatic mutations in 74 percent of them. The majority of those mutations generated new transcription factor binding sites.

Together, the studies show that “although our focus has been on the 1 percent of the genome that codes for proteins, there are potentially important discoveries in the rest of the genome,” said Huang. Indeed, Mardis added, if researchers continue to focus on exome or targeted sequencing of cancer genomes, “we are going to miss the clues available from analysis of the whole genome that may . . . ‘matter’ to driving the cancer growth.” 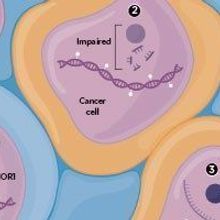