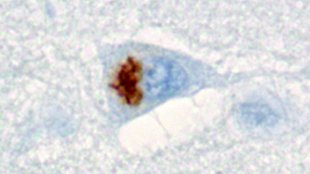 Dipeptide repeat inclusion in patient brainKohji Mori and Dieter EdbauerA repetitive DNA sequence that was not believed to encode proteins is, in fact, the source of insoluble peptide chains that aggregate in the brain cells of patients displaying certain types of neurodegeneration, according to a study published today (February 7) in Science. These aggregates occur in a wide range of neurodegenerative disorders, so determining their identity is an important first step towards understanding how they might contribute to various pathologies.

“It’s a very exciting and important paper,” said Bruce Miller, a professor of neurology at the University of California, San Francisco, who was not involved in the study. “We’ve all been waiting, in the field, for someone to make this breakthrough, so I’m just thrilled.”

When the mutation was first discovered, two principle hypotheses arose as to how it might cause disease, said Dieter Edbauer, a professor of translational neurobiochemistry at the Ludwig Maximilians Universität in Munich, Germany, who led the study. One idea is that the RNA transcript containing the repeats might sequester important RNA-binding proteins in aggregates, preventing their proper function. The other hypothesis posits that the repeats might inhibit correct transcription or RNA splicing of C9orf72. The possibility that the repeats might be translated into peptides was a bit of a shot in the dark, Edbauer admitted. “I thought, a lot of big labs will look into [the two main hypotheses], and I don’t have a real chance to compete with them,” he joked.

Although the repeats are in a non-coding region of the C9orf72 gene and thus should not be translated at all, there were precedents for such illegitimate translation and, moreover, the possibility was “so attractive,” said Edbauer. He realized that if translation did occur, the proteins “would be extremely hydrophobic, so it would really make sense that they would aggregate in patients.”

The repeating DNA sequence is 6 nucleotides long, and researchers estimate that several hundred copies of the sequence exist in FTLD-ALS patients carrying the C9orf72 mutation, with healthy people carrying fewer than 25. If translated, the sequence would encode chains of two-amino-acid, or dipeptide, repeats. And, depending on where in the sequence translation is initiated, those dipeptides could be glycine-alanine, glycine-proline, or glycine-arginine.

Edbauer created antibodies to detect all three possible dipeptide chains, and found that all three were present in protein aggregates in the postmortem brains of C9orf72 mutation-carrying patients. The peptide chains were not present in patients without the mutation, however.

Identifying the nature of the inclusions was an important issue to resolve, said Ian Mackenzie, a professor of pathology and laboratory medicine at the University of British Columbia in Vancouver, Canada, who was not involved in the study. But “even if the finding is correct, is it at all relevant from a pathogenic point of view?” he asked. Indeed, it is still possible that the other hypotheses about the C9orf72 mutation are correct and that the aggregates are a by-product.

The mutation could even cause disease by a combination of mechanisms, Mackenzie said. “The next set of experiments [should] be to see whether clearing these peptides or blocking them will protect cells,” Miller added.

Edbauer thinks it is likely the inclusions will turn out to be toxic. “We don’t know in what way they are toxic, but it is unlikely that they are doing anything good,” he said. “Normal people don’t have these proteins at all.”

The absence of the peptides in healthy people also “makes them an attractive target for therapy,” said Edbauer. “One could imagine it might be easier to find a specific strategy to block their synthesis, their toxicity, or their aggregation . . . without causing side effects.”