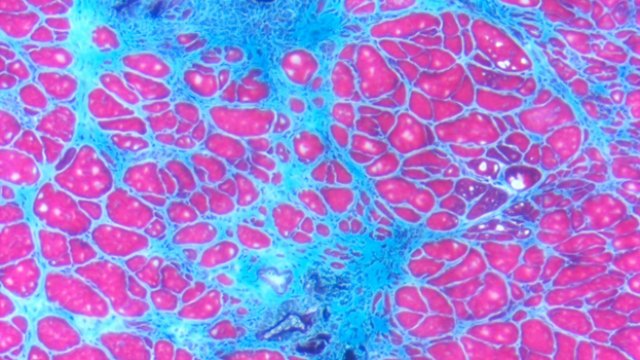 Muscle from a mouse model of Duchenne muscular dystrophy. Fibrous scar tissue is in blue and healthy muscle is in pink.CONBOY LAB AND MURTHY LABWhile promising, applications of CRISPR-Cas9 gene editing have so far been limited by the challenges of delivery—namely, how to get all the CRISPR parts to every cell that needs them.  In a study published today (October 2) in Nature Biomedical Engineering, researchers have successfully repaired a mutation in the gene for dystrophin in a mouse model of Duchenne muscular dystrophy by injecting a vehicle they call CRISPR-Gold, which contains the Cas9 protein, guide RNA, and donor DNA, all wrapped around a tiny gold ball.

The authors have made “great progress in the gene editing area,” says Tufts University biomedical engineer Qiaobing Xu, who did not participate in the work but penned an accompanying commentary. Because their approach is nonviral, Xu explains,...

Duchenne muscular dystrophy is a degenerative disease of the muscles caused by a lack of the protein dystrophin. In about a third of patients, the gene for dystrophin has small deletions or single base mutations that render it nonfunctional, which makes this gene an excellent candidate for gene editing. Researchers have previously used viral delivery of CRISPR-Cas9 components to delete the mutated exon and achieve clinical improvements in mouse models of the disease.

“In this paper, we were actually able to correct [the gene for] dystrophin back to the wild-type sequence” via homology-directed repair (HDR), coauthor Niren Murthy, a drug delivery researcher at the University of California, Berkeley, tells The Scientist. “The other way of treating this is to do something called exon skipping, which is where you delete some of the exons and you can get dystrophin to be produced, but it’s not [as functional as] the wild-type protein.”

The research team created CRISPR-Gold by covering a central gold nanoparticle with DNA that they modified so it would stick to the particle. This gold-conjugated DNA bound the donor DNA needed for HDR, which the Cas9 protein and guide RNA bound to in turn. They coated the entire complex with a polymer that seems to trigger endocytosis and then facilitate escape of the Cas9 protein, guide RNA, and template DNA from endosomes within cells.

In order to do HDR, “you have to provide the cell [with] the Cas9 enzyme, guide RNA by which you target Cas9 to a particular part of the genome, and a big chunk of DNA, which will be used as a template to edit the mutant sequence to wild-type,” explains coauthor Irina Conboy, who studies tissue repair at the University of California, Berkeley. “They all have to be present at the same time and at the same place, so in our system you have a nanoparticle which simultaneously delivers all of those three key components in their active state.”

They coated the entire CRISPR-Gold complex with a polymer that seems to trigger endocytosis and then facilitate escape of the Cas9 protein, guide RNA, and template DNA from endosomes within cells.

Conboy, Murthy, and colleagues found that CRISPR-Gold induced HDR in targeted genes in vitro in a variety of cell types, including human embryonic stem cells and mouse muscle cells. They then tested CRISPR-Gold HDR efficiency in vivo by injecting it into the muscles of a mouse model for Duchenne muscular dystrophy that does not produce dystrophin. A single dose of CRISPR-Gold restored dystrophin levels two weeks after injection and corrected the relevant point mutation to the wild-type sequence in about 5 percent of the copies of the gene for dystrophin in injected muscles. Injection of the Cas9 protein, guide RNA, and donor DNA without the particles corrected less than 1 percent of the copies of the gene for dystrophin. Muscle function also improved in mice treated with CRISPR-Gold.

This work “is a big step forward for biomedical application of CRISPR,” says Vincent Rotello, a drug delivery and nanotechnology researcher at the University of Massachusetts at Amherst who did not participate in the work. “There are some applications where a localized injection like this makes sense,” he adds, but “one of the challenges with the [CRISPR-Gold] system is it doesn’t have systemic delivery.”

“Ideally, you would inject into the bloodstream because then the particles could go into every single muscle,” agrees Conboy. She and Murthy continue to investigate ways to improve delivery and editing efficiency, both for Duchenne muscular dystrophy and other genetic diseases.

Two of the paper’s other authors, Kunwoo Lee and Hyo Min Park, founded a company called Genedit to explore commercial applications of CRISPR-Gold. “We’re certainly very excited about the therapeutic possibilities of delivering the Cas9 protein,” says Murthy, who serves as a scientific advisor.

“There’s a lot of work to be done to move to the point where we’ll actually be able to cure diseases,” says Rotello, “but I think this shows the way forward.”