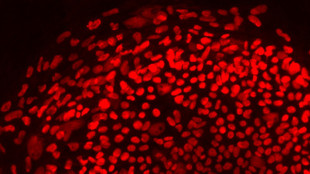 Shoukhrat Mitalipov, a reproductive biologist and director of the Center for Embryonic Cell and...

Both iPSCs and SCNT-derived cells showed similar numbers of acquired genomic deletions and duplications. But while the iPSCs retained some of the epigenetic and gene expression patterns of their parental somatic counterparts, the SCNT-derived cells had transcriptional and epigenetic patterns that were more like in vitro fertilized (IVF) ESCs, which are considered the most authentic form of ESCs, as they are directly isolated from human embryos.

Unlike IVF ESCs, however, patient-derived somatic cells reprogrammed into pluripotent stem cells present a better opportunity for patient-tailored therapies—they overcome the issue of donor-recipient matching. Both SCNT-derived cells and IPSCs mimic the characteristics of true ESCs, but previous studies have shown that iPSCs can acquire both epigenetic and transcriptional aberrations during the stem-cell conversion process. The present study is the first to compare the genetic variability of SCNT-derived cells to that of IVF ESCs, showing that the somatic-to-stem-cell conversion results in the acquisition of these aberrations and is not somehow secondary to this process.

While both reprogrammed stem cell types preserved some of their parental epigenetic memory, the iPSCs retained eight-fold more of these methylation sites. “For both [stem cell types], there are genomic regions that look like the original fibroblast line but there are far fewer in the stem cells made by nuclear transfer,” said study coauthor Joseph Ecker, who directs the Salk Institute’s Genomic Analysis Laboratory. “There is still room for improving both methods,” Ecker added. “We need to understand what characteristics and processes are still lacking [in these pluripotent cells] to bring them to the ideal epigenetic reprogrammed state.”

“This is an extensive analysis and a first look at comparing the cells made with these two different methods,” said Dieter Egli, a regenerative medicine specialist at the New York Stem Cell Foundation and Columbia University.

But the functional significance of the differences observed between these types of stem cells must still be addressed, he added. Because the stem cell lines analyzed all came from a single somatic cell source, it will be important to extend these analyses to other stem cell lines, before drawing conclusions, said Egli.

Daley agreed. “What remains unknown is whether these differences, which are overall quite minor, will compromise the value of iPS cells in any way,” he told The Scientist. There are already clinical trials planned to evaluate patient-derived iPSCs. An important question is whether SCNT-derived cells provide an advantage over iPSCs for use in disease modeling and cell-based therapies to justify the increased effort in generating them, said Daley.

Also unknown is whether the age of the somatic cell from which stems cell are derived matters for therapeutic use. For the present study, Mitalipov’s team used fetal fibroblasts. But other studies, including one from the Egli laboratory, have shown that the technique works even with cells taken from adult patients. Whether the age of the donated nucleus affects reversion back to a stem-cell state is something that Ecker and Mitalipov would now like to investigate. The researchers also plan to analyze other epigenetic signatures of these different stem cell lines, including histone modifications.