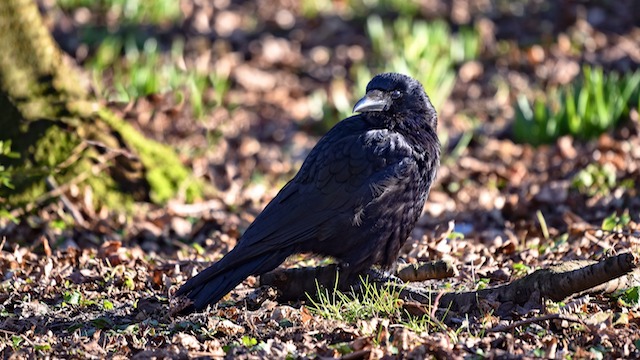 The ability to perceive the number of items in a set, or numerosity, is widespread in the animal kingdom. Scientists have long wondered whether this skill, observed in species as diverse as monkeys, birds, and insects, is innate. Now, researchers have identified neurons that respond spontaneously to number in crows never trained to distinguish numerical quantities. The findings, published today (March 15) in Current Biology, suggest that numerosity may indeed be a hardwired trait.

A growing body of evidence supports the idea of a “number sense,” the innate ability to process discrete amounts. For example, researchers have found that newborn chicks have rudimentary arithmetic capabilities, and that human babies can perceive abstract numerical representations after only 50 hours of life.

“In principle, one might have predicted that somewhere in the brain such neurons exist because there’s now ample evidence from animal...

Nieder and his colleagues have previously found neurons that respond to number in the brains of numerically-naïve monkeys. For the latest study, the team turned to crows for two key reasons, according to Nieder. In addition to having brains that are evolutionarily distant from those of primates, these birds “have a reputation for being extremely smart . . . in many instances on par with non-human primates,” he says. “They are the sort of Einsteins among birds.”

We now have a more general notion of how number is encoded, not just in primates, but also in animals with whom we shared the last common ancestor around 320 million years ago.

Indeed, studies have shown that members of the corvid family, which includes crows and ravens, can use tools, plan for the future, and may have a basic “theory of mind,” the capacity to ascribe mental states to others.

Prior work has also shown that crows, like many other animals, can discriminate different amounts. To investigate whether the ability is hardwired, Nieder and his colleagues used implanted electrodes to record activity from adult crows’ endbrains—the bird equivalent of the human cerebral cortex, the highest processing center in the brain—while the animals engaged in a task in which they were rewarded each time they correctly identified sets of dots that matched in color. This revealed that, despite not being trained to identify discrete quantities, the animals possessed neurons that fired faster when they saw specific numbers of dots.

“It’s a fascinating piece of research” for two reasons, says Giorgio Vallortigara, a neuroscientist at the University of Trento in Italy who was not involved in the work. “One is the fact that this is the first evidence at the neurophysiological level that birds have spontaneous activity in neurons that respond to numerosity.” The other, he adds, is that despite the differences in the architecture of corvid and primate brains, the activity of the number-selective neurons in crows appear to be similar to those described in monkeys.

“This mechanism is clearly shared among vertebrates,” Vallortigara says. Still, he adds, to really pin down whether number-selective neurons are hardwired or learned in birds, researchers will also need to identify them in juvenile animals.

For Nieder, the new findings, together with his team’s earlier work on monkeys, suggest that “evolution has found at least one other brain-building plan that allows animals without a cerebral cortex to also represent the number of objects in a set.”

“We now have a more general notion of how number is encoded, not just in primates, but also in animals with whom we shared the last common ancestor around 320 million years ago,” he adds.

Why, exactly, such a skill might have evolved in many different animals is still an open question, according to Jennifer Vonk, a comparative psychologist at Oakland University. Prior studies provide clues—for instance, scientists have found evidence suggesting that animals use numerical information in social interactions and for foraging decisions. However, while it makes sense for animals to count group members, it’s unclear why they would need to identify the specific number of items rather than estimate approximate quantities when it comes to food, Vonk says. “I think as a next step it would be interesting to see whether less social birds were also able to do this spontaneously.”