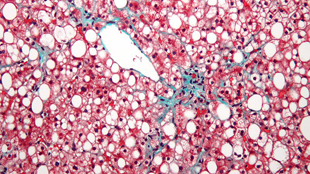 Fatty deposits (white) are scattered throughout this micrograph of a liver afflicted with non-alcoholic fatty liver disease.WIKIMEDIA, NEPHRON

Obesity spurs changes in the gut microbiome that can lead to the production of DNA-damaging metabolites. And according to new research published today (June 26) in Nature, circulation of these metabolites through the gut and liver initiate inflammatory and tumor-promoting factors that make mice more susceptible to liver cancer.

“This is a fascinating set of findings,” said Peter Turnbaugh, a systems biologist at Harvard University, who did not participate in the research. “This study shows that changes to the trillions of microbes that are found in the gut in response to obesity can contribute to the formation of damaging microbial metabolites.”

Obesity has been on the rise in developed nations over the past few decades, with one third of adults in the United States considered obese. Though obesity has...

To explore how obesity could cause cancer, researchers at several cancer centers in Japan turned to a mouse strain expressing a luminescent marker for a gene that induces a condition called the senescent-associated secretory phenotype (SASP). Though senescence, the cessation of cell division that accompanies old age, has been shown to suppress tumor formation, recent evidence indicates that under certain conditions, senescent liver cells produce pro-inflammatory factors that promote tumor growth. Cells in this senescent but pro-inflammatory state are exhibiting SASP.

The researchers first looked for a difference in cancer development between obese mice fed a high-fat diet and lean mice fed a normal diet. Unable to observe a significant difference, the researchers suspected that obesity-linked cancer may require an oncogenic stimulus. Sure enough, when exposed to a chemical carcinogen, all of the obese mice developed liver cancer, whereas only 5 percent of the lean mice did. The obese mice also had higher levels of the SASP luminescent marker in the hepatic stellate cells—the primary cell type involved in formation of scar tissue following liver damage—suggesting that obesity stimulates the condition.

To explore how obesity could cause SASP, the researchers looked to recent evidence that obesity is associated with large-scale changes to the trillions of bacteria in the gut that can produce damaging inflammatory metabolites. Thinking that proliferating microbes in the gastrointestinal tracts of the obese mice could be triggering SASP, the researchers treated the mice with vancomycin or a cocktail of four antibiotics to kill off most of the bacteria. The treated mice showed a significant reduction in liver cancer, suggesting that certain gut bacteria were indeed to blame for the spike in cancer incidence.

“The findings implicate hepatic stellate cells as an important transducer of the signals that emerge from the microbiome in altering the microenvironment to favor the emergence of cancer,” said physician and liver disease researcher Scott Friedman of the Icahn School of Medicine at Mount Sinai in New York, who did not participate in the research.

The researchers were also able to pinpoint a specific gut bacteria metabolite—the known carcinogen deoxycholic acid (DCA)—as the trigger for SASP. Inhibiting the production of DCA suppressed liver cancer in obese mice, whereas antibiotic-treated mice given a high-fat diet including DCA experienced a surge in liver cancer.

“These findings will open up new possibilities for preventing the development of obesity-associated cancer by controlling the levels of DCA or DCA-producing gut bacteria,” said study lead Naoko Ohtani, a cancer biologist at the Japanese Foundation for Cancer Research.

Of course, Turnbaugh cautioned, “there’s always the problem of whether these results will translate to humans.”

So far, Ohtani’s team has been able to demonstrate that gene expression of inflammatory factors associated with SASP can be induced in human hepatic stellate cells in vitro. In addition, research by other groups has found that human patients with non-alcoholic fatty liver disease, a risk factor for liver cancer, have been shown to display signs of SASP in hepatic stellate cells. Also, high fat consumption in humans is linked to high levels of DCA in fecal samples.

“This paper emphasizes that we’re not alone in the world,” said Turnbaugh. “The human body is really a complex microbial community with microbes responding to different cues, including changes in diet.”