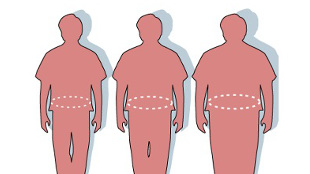 WIKIMEDIA, PHAROSObesity can contribute to a poor prognosis for colorectal cancer patients, including those who have the tumor microsatellite instability (MSI) marker associated with better disease outcome, according to an unpublished analysis of data from a prospective study involving nearly 5,000 patients.

Researchers working with the American Cancer Society’s Tumor Repository found that patients who had a high body-mass index (BMI) before being diagnosed with colorectal cancer were more likely to have a poorer prognosis than those who had a healthy BMI. The same applied to even prediagnosis high-BMI patients who had MSI-high tumors. The negative impact of elevated BMI on colorectal cancer prognosis appeared to trump the so-called “protective” effects of elevated MSI, the team found.

“It was interesting to see the magnitude of the change in these groups,” said Peter Campbell, the director of Tumor Repository, who is presenting his team’s findings at the American Association...

“They had a large, well-characterized population of individuals who had been diagnosed with colorectal cancer and the ability to follow up for a reasonable amount of time,” said Paul Terry, an epidemiologist at the University of Tennessee, Knoxville, who was not involved in the work. Terry noted, however, that colorectal cancer can “take 30 to 40 years to develop in many cases, and people go through metabolic changes over time,” so a deeper dive into the biology could be demonstrative.

“Simply collecting and harmonizing data from thousands of patients from multiple study centers was a major hurdle in this analysis,” Campbell added. “It took several months to get the data harmonized in a meaningful manner and a few weeks to analyze it properly,” he explained in an e-mail to The Scientist.

“This [study] should provide a reference point for people to understand the potentially serious consequences of obesity and colorectal cancer,” said Terry. But, he asked, “are the tumors [of obese patients] qualitatively different?”

Campbell said his team will submit its findings for publication soon, and next plans to investigate how a colorectal cancer patient’s clinical and molecular statuses might together impact prognosis.

“We hope to look more deeply into the joint impacts of molecular features and lifestyle factors on colorectal cancer incidence and survival,” he said.