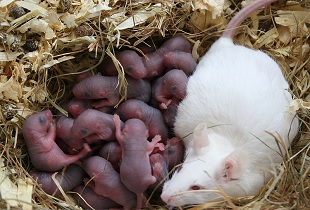 While scientists have identified several genetic risk factors for diabetes and obesity, some have proposed epigenetic alterations in gametes as another potential mechanism of disease risk inheritance. Now, a mouse study by researchers in Germany provides new evidence in support of this epigenetic inheritance theory, showing that different diets in otherwise identical mice can determine glucose intolerance and obesity risk in offspring via egg and sperm cells. The team’s findings were published today (March 14) in Nature Genetics.

“The view so far was that [risk] is all determined by genes—it’s fate,” said study coauthor Johannes Beckers of the Helmholtz Zentrum München. “But our findings give back a certain responsibility to the parents. They really have the possibility to affect what offspring inherit in their epigenome.”

Approximately 90 percent of nearly 350 million cases of diabetes worldwide are classified as type 2. In addition to environmental factors...

However, previous analyses of the phenomenon have relied on in vivo fertilization to produce offspring, explained Beckers, making it difficult to distinguish heritable, epigenetic determinants in the gametes from other factors that can influence offspring development, such as the composition of paternal seminal fluid or diet-induced changes in the uterus during pregnancy.

The researchers then carried out IVF with egg and sperm cells from various pairings of mice fed on the same or different diets, and implanted the resulting embryos into healthy surrogate females, thus eliminating parental influence on offspring beyond the contribution of gametes.

For nine weeks after birth, the new generation—comprising more than 350 mice—ate a normal diet. The team then “challenged” all offspring with a fatty diet, and recorded the animals’ weight over the next six weeks, as well as the animals’ responses to injected glucose.

While all mice grew fatter, weight gain was strongly dependent on the parental diet, particularly among female offspring. By the end of the challenge, “female offspring from two parents on high-fat diets were 20 percent heavier than offspring with both parents on a [control] diet,” said study coauthor Peter Huypens of the Helmholtz Zentrum. “That was amazing.”

University of Nottingham epigeneticist Reinhard Stöger, who was not involved in the study, called the findings “fascinating.” Now, he said: “the big question is: How long do these effects last? The F2 generation? The F3 generation? How stable are these epigenetic marks, or additional information?”

Stöger added that it remains unclear how quickly parental diet effected changes in gametes. “If you expose [parents to high-fat diets] for one week, would you see the same effect? At the extreme, would it matter if you just eat one cheeseburger?”

Andy Feinberg of the John Hopkins University School of Medicine in Baltimore cautioned that although the study was “very well-designed and well-controlled,” extrapolations to human biology would require further research involving more complex genetic backgrounds. “To generalize and say that this transgenerational effect is a major contributor in human diabetes—I don’t think you can draw a conclusion like that from a single inbred strain of mice,” said Feinberg, who was not involved in the research.

For now, the team hopes to home in on the mechanisms accounting for heritable epigenetic modifications acquired during a parent’s lifetime, said Beckers, adding that he and his colleagues are already investigating diet-induced changes in the gametes’ RNA transcripts and methylomes.

“The data that we have so far indicate that both of them appear to be affected by parental diet,” he said. “This is something that excites us very much. We’re nibbling [away] a little bit at this dogma of neo-Darwinism that acquired traits cannot be inherited.”