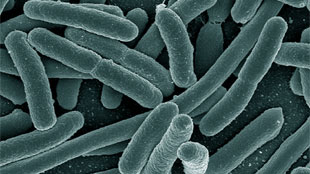 Escherichia coliWIKIPEDIAPhysical traits like obesity and leanness can be “transmitted” to mice, by inoculating the rodents with human gut microbes. A team of scientists led by Jeffrey Gordon from the Washington University School of Medicine in St. Louis found that germ-free mice put on weight when they were transplanted with gut microbes from an obese person, but not those from a lean person.

The team also showed that a “lean” microbial community could infiltrate and displace an “obese” one, preventing mice from gaining weight so long as they were on a healthy diet. The results were published today (September 5) in Science.

Gordon emphasized that there are many causes of obesity beyond microbes. Still, he said that studies like these “provide a proof-of-principle for ameliorating diseases.” By understanding how microbes and food interact to influence human health, researchers may be able to design effective probiotics that can...

The human gut is home to tens of trillions of microbes, which play crucial roles in breaking down food and influencing health. Gordon’s group and others have now shown that obese and lean people differ in their microbial communities. Just last week, the MetaHIT consortium showed that a quarter of Danish people studied had a very low number of bacterial genes in their gut—an impoverished state that correlated with higher risks of both obesity and metabolic diseases.

However, descriptive studies like these cannot tell scientists whether such microbial differences are the cause of obesity or a consequence of it. “A lot of correlations are being made between microbe community configurations and disease states, but we don’t know if these are casual or causal,” said Gordon. By using germ-free mice as living laboratories, Gordon and his colleagues aim to start moving “beyond careful description to direct tests of function,” he added.

“It’s extremely exciting and powerful to go from descriptive studies in humans to mechanistic studies in mice,” said Oluf Pedersen, an endocrinologist who was involved in the MetaHIT studies. “That’s beautifully illustrated in this paper.”

Gordon lab graduate student Vanessa Ridaura inoculated the germ-free mice with gut microbes from four pairs of female twins, each in which one person was obese and the other had a healthy weight. Mice that received the obese humans’ microbes gained more body fat, put on more weight, and showed stronger molecular signs of metabolic problems.

Once the transplanted microbes had taken hold in their guts, but before their bodies had started to change, Ridaura housed the two groups of mice together. Mice regularly eat one another’s feces, so these cage-mates inadvertently introduced their neighbors’ microbes to their own gut communities. Gordon called this the “Battle of the Microbiota.”

These co-housing experiments prevented the mice with “obese” microbes from putting on weight or developing metabolic problems, while those with the “lean” microbes remained at a healthy weight.

Gordon explains that the obese microbe communities, being less diverse than the lean ones, leave many “job openings” within the gut—niches that can be filled by the diverse lean microbes when they invade. “And obviously, those job openings aren’t there in the richer, lean gut community,” he said. “That’s why the invasion is one-directional.”

“But if invasion is so robust, why then isn’t there an epidemic of leanness?” asked Gordon. “The answer appears to be, in part, diet.”

In her initial experiments, Ridaura fed the mice standard chow, which is high in fiber and plant matter. She also blended up two new recipes, designed to reflect extremes of saturated fat versus fruit and vegetable consumption associated with Western diets.

If the mice were fed food low in fat and high in fruit and vegetables, Ridaura found the same results as before—the lean microbes could cancel out the effect of the obese ones. But when the mice were fed food low in fruit and vegetables and high in saturated fat, those with obese gut microbes still gained weight, no matter who their neighbors were.

This may be because the best colonizers among the lean communities were the Bacteroidetes—a group of bacteria that are excellent at breaking down the complex carbohydrates found in plant foods. When the mice ate plant-rich diets, the Bacteroidetes could fulfill a metabolic role that was vacant in the obese gut communities. When the mice ate unhealthy, plant-poor diets, “these vacancies weren’t there and the organisms couldn’t establish themselves,” said Gordon.

“We’re now trying to identify particular sets of organisms that can do what the complete community does,” Gordon added. The ultimate goal is to create a set of specific bacteria that could be safely administered as a probiotic that, along with a defined diet, could help these beneficial microbes to establish themselves and might effectively prevent weight gain.

“This study is an inspiration for us at MetaHIT,” said Pedersen. “It would be very interesting to take stools or cultures from extreme cases within our samples—people who have very rich or very poor gut microbiomes—and inoculate them into germ-free mice. . . . Now that we have a proof-of-concept, it’s obvious for us to follow up our findings through these studies.”