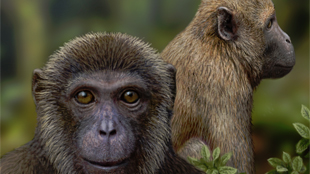 Rukwapithecus (foreground) and Nsungwepithecus (background). MAURICIO ANTONThe genes of living primates tell us that the ape lineage, which includes humans, diverged from the Old World monkeys such as baboons and macaques during the late Oligocene period, between 25 and 30 million years ago. But fossils from both groups only date back to 20 million years ago. Now, a team of paleontologists have found two new species in Tanzania’s Rukwa Rift Basin that help to fill this gap in the fossil record. Their findings are published in Nature today (May 15).

The first new fossil was unearthed in 2011, when the team found a molar belonging to the oldest known Old World monkey or cercopithecoid, which they named Nsungwepithecus gunnelli. A year later and 15 kilometers away, they found the oldest known remains of a hominoid or “ape”—a jawbone and four teeth belonging to a new species that they...

Both species were found in sediments that date to precisely 25.2 million years ago. “As early as [that], we already have forms that significantly diversified from one another,” said Nancy Stevens from Ohio University, who led the study. “That implies that the hominoid-cercopithecoid divergence was well underway.”

“It seems that a good divergence date might be between 26 and 27 million years ago,” said Gregg Gunnell from Duke University, whom N. gunnelli is named after. “I think almost all paleontologists and molecular biologists could live with this divergence date.” (Gunnell, who took Stevens into the field when she was first starting out, adds that he is “very honored” to be commemorated in the new fossil.)

Primate fossils from the late Oligocene are rare, partly because there are few deposits of the right age and they tend to be covered in thick vegetation. The Rukwa Rift Basin is an exception, and Stevens’s team has been studying it for more than a decade.

Although the two specimens they found are mere fragments of their former owners, the team could tell that they belonged to new species thanks to the teeth’s distinctive collection of crests, clefts, and cusps. They also used these features to work out how Nsungwepithecus and Rukwapithecus fit in the primate family tree.

Stevens clarifies that although some previously discovered hominoids may have evolved earlier than Rukwapithecus, its fossils are the oldest yet discovered for this group. But David Begun, a paleoanthropologist from the University of Toronto, is not sure. He thinks that Kamoyapithecus—another Oligocene primate that lived 27 million years ago in Kenya—might also be a hominoid. He even wonders if it was the same animal as Rukwapithecus, since one is known from upper teeth and the other from lower ones.

Nonetheless, the new discoveries expand the range of Oligocene primates from a handful of fossils in Kenya and Saudi Arabia, to the more southerly country of Tanzania. This location also suggests that the ape and Old World monkey lineages arose against a background of great geological upheaval. By the time Rukwapithecus and Nsungwepithecus appeared, the climate was warming and the flat Tanzanian landscape had already begun to fragment into mountains, deep rifts, and lakes, creating the beginnings of the Eastern African Rift. These changes could have created many new habitats, and fueled the diversification of the local primates.

“Many of us were expecting [similar] fossils to occur in a more tectonically stable landscape, and were searching to the north in Kenya, Libya, and Egypt,” said Brenda Benefit, an anthropologist from New Mexico State University. “The Rukwa Rift Basin Project has succeeded in destroying those preconceived notions and opens many new possibilities.”

“The discovery of two new forms from the Rukwa Rift speaks volumes about the faunal diversity that remains to be discovered,” added Stevens. “We suspect that by 25 million years ago, there were already several independent lineages of both apes and monkeys in Africa, but paleontologists just haven’t found their fossil remains yet. We are soon headed back to the field to try to find some more!”