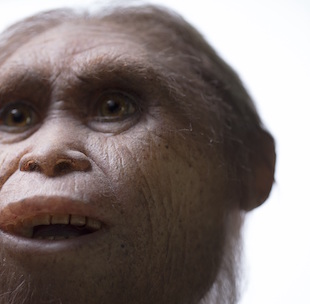 Reconstruction of Homo floresiensis by Atelier Elisabeth DaynesKINEZ RIZAScientists have discovered hominin remains from the Indonesian island of Flores that may belong to the “hobbit”-like hominin species Homo floresiensis, according to a study published today (June 8) in Nature. In a second study, the researchers estimate that the specimens are around 700,000 years old. The findings provide the strongest evidence to date that H. floresiensis was indeed a distinct species, and significantly push back the age when these small hominins first appeared.

“It really is the final nail in the coffin for people who believe hobbits were pathological modern humans,” anthropologist William Harcourt-Smith of Lehman College in New York City, who was not involved with the work, told The Scientist. “The whole package speaks to something very Homo floresiensis-like.”

“Up until now, it was not possible to test either hypothesis against the fossil record,” study coauthor Gerrit van den Bergh of the University of Wollongong, Australia, told reporters during a June 7 press briefing.

In 2014, van den Bergh, Yousuke Kaifu of Japan’s National Museum of Nature and Science, and their colleagues excavated six isolated teeth and a jaw fragment from a sandstone formation in Mata Menge, an early Middle Pleistocene site in the So’a Basin of central Flores. The size and shape of the fossils—derived from at least three individuals—resemble the hobbit fossils found in Liang Bua, but are about 20 percent to 30 percent smaller, according to the researchers. Using CT scanning, the team was able to show that the fossils were from adults.

“Our working hypothesis is, this is a Homo floresiensis-like fossil,” study coauthor Adam Brumm of Griffith University, Australia, told reporters during the briefing. Brumm stopped short of saying the fossils belong to the species. 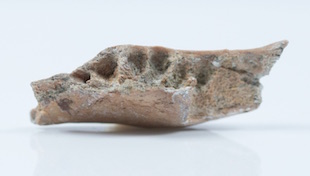 Hominin fossilKINEZ RIZABrumm and colleagues used a quartet of different dating techniques to pin down the age of the fossils to about 700,000 years old, making them the oldest hominin remains from Flores.

The researchers used Argon dating and fission track dating on the volcanic ash in the sandstone deposits where the fossils were found, in addition to uranium-series and electron spin resonance dating of the fossilized teeth themselves. The evidence suggests these hobbit-like hominins lived in a relatively dry, grassy habitat with scattered water sources, such as streams.

The hominin remains were found alongside primitive stone tools similar to those found at Liang Boa, as well as fossils of other animals, including an extinct species of dwarf elephant, rats, Komodo dragons, and birds, the researchers reported in their papers.

When the researchers compared the fossils to those of Australopithecus and H. habilis, they found the former were much more modern, supporting the hypothesis that H. floresiensis descended from early Asian H. erectus, the researchers noted.

The finding “demonstrates that there were small hominins on Flores for a very long time,” Leslie Aiello, president of the Wenner-Gren Foundation for Anthropological Research in New York City, who was not involved in the studies, wrote in an email to The Scientist. “It is a shame that the fossil material is so fragmentary, but it certainly does seem to support the idea that H. floresiensis descended from an early Asian H. erectus rather than from an earlier hominin,” Aiello added.

Not everyone agrees with this interpretation. “More work needs to be done and more [fossil evidence] needs to be found to make the case that this is definitely [descended] from Homo erectus,” Harcourt-Smith said.

“It’s extremely impressive work by a very good group of researchers,” paleoanthropologist Bernard Wood of George Washington University said of the studies. “Both the teeth and the jaw make it very clear to me that the hominins they found belong to Homo floresiensis. That’s the most parsimonious explanation.”

The findings open up new questions about how these hobbit-like hominins first reached Flores. Van den Bergh said he thinks the most likely explanation is that a tsunami stranded H. floresiensis’s ancestors on the island, where evolutionary pressures eventually shrunk their brains and bodies.

However, “we’ve so far only discovered a small number of fossils from Mata Menge,” van den Bergh noted. “More questions must await the discovery of additional fossil remains.”