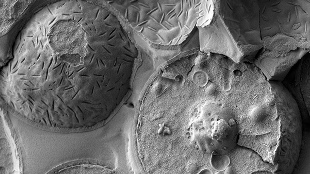 FLICKR, ZEISS MICROSCOPYResearchers had long suspected that silencing one gene could cause secondary effects elsewhere in the genome. But just how widespread these “secondary mutations” are was largely left to conjecture. Now, a team led by investigators at the Johns Hopkins University School of Medicine in Baltimore, Maryland, has shown that perturbation of any single gene in the yeast genome is sufficient to drive subsequent genetic changes. The team’s results were published today (November 5) in Molecular Cell.

“Certainly people had seen secondary mutations before in these yeast strains, but I think what’s special is the prevalence of them,” said Stanford University’s Michael Snyder, who was not involved in the work. The study, he added, shows that “a very large number of knockouts have a secondary mutation—much higher than I would have guessed.”

J. Marie Hardwick and her colleagues were exploring cell death mechanisms in yeast when...

The researchers then examined cells from 250 different S. cerevisiae knockout strains. “Using only two types of assays”—testing avoidance of cell death and ability to grow despite signs of nutrient depletion—“our evidence indicates that over 75 percent of knockout strains exhibit a dramatic cell death and/or growth phenotype due to one or sometimes two additional selected mutations,” Hardwick told The Scientist in an e-mail. “[I]t was stunning to visualize the extent of this phenomenon across an eukaryotic genome.”

Further, the team found that independent knockouts of the same genes tended to select for subsequent mutations in the same secondary genes, suggesting that one mutation can “drive the selection for new mutations even in the absence of deliberate environmental selection pressures,” Hardwick said.

“One mutation will almost certainly build selective pressure for a second mutation,” agreed Snyder. “That’s an important concept because there’s a lot of interdependency of genes, and it means you can drive evolution kind of quickly through multiple mutations.” Among other things, he added, the team’s observations could help explain “why tumors do what they do”—quickly acquire multiple mutations. Indeed, the researchers detected mutations in yeast orthologs of human oncogenes.

Hardwick, Teng, and colleagues suggest that their findings in yeast likely extend to other species, and therefore call for scrutiny in the study of knockouts.

The widespread detection of secondary mutations does not invalidate previous work involving knockout strains, Snyder noted, but he agreed that some caution is warranted.

“We always knew there was a possibility of secondary mutations in these collections,” said Snyder, but “it’s one thing to expect it; it’s another to show it.”