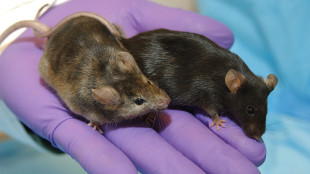 WIKIMEDIA, MAGGIE BARTLETT/NHGRIObesity damages females’ developing oocytes even before they are fertilized, according to a mouse study published today (February 10) in Development. Eggs from obese mothers had mitochondrial defects, and the resulting offspring had fewer mitochondria than controls in liver and kidney tissue, indicating that during development, the mitochondria had failed to propagate.

“We now have information that health prior to conception is affecting the nutritional environment of the ovary, [that] it’s affecting the nutritional environment of the egg, and that signals are stored in that egg before it’s even fertilized,” said the University of Adelaide’s Rebecca Robker, who led the research.  “And those get carried on into the embryo and are now showing into the offspring.”

The researchers also reported that they were able to reverse these problems using inhibitors of what’s called endoplasmic reticulum (ER) stress—protein-processing problems in the ER that initiate a cascade...

Obesity is associated with infertility in humans, leading obese women to often turn to assisted reproductive technologies, such as in vitro fertilization (IVF). Obesity is associated not only with ovulation problems but also with miscarriage. “It’s pretty well established that being overweight or obese causes fertility problems in women,” Stephanie Pangas, a reproductive biologist at the Baylor College of Medicine in Houston, Texas, who was not involved in the study, wrote in an e-mail to The Scientist. “Part of the issue lies within the oocyte itself, and it hasn’t been really clear as to what the defect is.”

Previous research had shown that obesity and associated high lipid levels in cells induced ER stress, and the Robker lab found that this stress response, which affects mitochondria, also took place in the ovaries of obese mice and women. Along with postdoc Linda Wu, Robker decided to test whether ER stress inhibitors could reverse the damage.

The researchers used female mice of the “Blobby” strain, which have a mutation that causes them to overeat and become obese. Before ovulation, both obese and control female mice were injected with one of two ER-stress inhibitors, or a placebo. The researchers then tested the animals’ eggs for various measures of health, focusing on mitochondrial function. To monitor the development of resulting progeny, the researchers fertilized the oocytes in vitro and transplanted them into non-obese surrogate mothers. Then, on embryonic day 14.5, the fetuses were harvested and weighed. Levels of mitochondrial DNA, a proxy for mitochondrial number overall, were also measured in several fetal tissues.

They found that oocytes from obese mothers had normal numbers of mitochondria initially, though the electrical potential across the membranes of these organelles—which can affect their function—was abnormally low. The fetuses derived from the obese animals’ oocytes were heavier than those from controls and showed reduced numbers of mitochondria in the liver and kidneys compared with the offspring of eggs from the control mice.

A decrease in mitochondria might promote obesity by impairing cellular ability to burn fuel, Robker hypothesized. “The implication is that we’ve discovered a mechanism by which obesity can lead to altered metabolism in offspring,” she said, “and potentially a propensity for their own development of obesity.”

ER inhibitors reversed all of these effects. The first, salubrinal, is a laboratory reagent that’s well understood but not tested in humans. The second, BGP-15, is a compound that is being tested as a treatment for type II diabetes.

“It’s quite remarkable that simply mediating the ER stress response has such a profound effect on oocyte physiology and can rescue the development defects in the offspring,” said Pangas. “There is much potential here for the IVF clinic,” she continued, citing the fact that BGP-15 is already being tested for human use.

However, David Albertini, an oocyte biologist from the University of Kansas Medical Center who was also not involved in the work, cautioned against extrapolating from these experiments in mice to treatments for humans. “The value of this paper is that, as a basic science paper, it adds some new knowledge to our understanding of how a mother’s health and in this case obesity can impact the mitochondria in her eggs and embryos,” he said. “But that’s not really that surprising. What comes across as new is maybe there will be ways to treat mice to prevent this from happening in the future, but I’m quite frankly not that convinced that this means much to human health.”