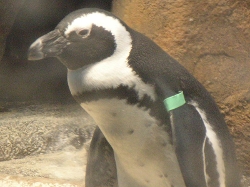 A female African Penguin with a green tag on its left flipperWIKIMEDIA, BROKENSPHEREIn 1971, NASA and the Smithsonian Institution deployed the first ever satellite collar, using a female elk they named Monique in the Grand Tetons in Wyoming. They spent months testing the collar, bright red and over 10 kilograms, to make sure it could survive everything an elk would put its way. The collar was well-armored, expected to make it through a frozen river without problems. Within a week after collaring Monique, she was dead.

NASA dubbed it a coincidence, but it illustrates an important concern that plagues most field biologists: Are the methods we use to research our animal subjects harming them, or inadvertently altering the biological systems we study?

As with most sciences, the main limit to knowledge in ecology is an observational problem: Our inability to fly, swim in arctic waters, run 120 kilometers...

By marking individuals, we can recapture them later to estimate a suite of important ecological characteristics, such as survival, movement, age, and change in body condition. Plastic leg bands, ear tags, radio collars, toe clipping and PIT tags—small electronic transponders implanted underneath the animals' skin—are all considered standard tagging methods. Hippopotamus researchers have even used different combinations of colored paint balls, a simple, safe (and, I assume, less monotonous) method for marking individuals.

The assumption, of course, is that these methods have no significant effects on the target species. And yet we must all have nagging doubts. How on earth can a 20 gram bird handle a 5 gram radio collar? What if the seed we use in our traps provides a significant nutritional benefit to the individuals we capture? Or what if the individuals we capture tend to be in poorer health, more willing to risk crawling into a cold, dark, box for what smells like a good meal? It becomes necessary to push these thoughts aside in order to continue the research at hand. There simply isn't enough time or money to conduct a meta-study on the effect our research has on our research subjects. And besides, how would such a thing even work?

The problem is neatly zen: how can you measure the effect of not studying a species? Some recent research, however, has suggested that such unspoken concerns may be warranted. Saraux and colleagues found, for example, that penguins with flipper bands experienced serious reductions in fecundity (39% fewer chicks) and survival compared with PIT-tagged, non-banded, birds. It may be easy to shrug off these results as an obvious consequence of the highly invasive tagging practice, as flipper bands are known to cause short-term injury and, long-term, increased drag while swimming. But other research has shown that even a small PIT tag can have behavioral consequences. In bivalves, for instance, PIT tagged individuals spent more time burrowing, possibly resulting in increased predation and dislodgment. Even individuals handled but not PIT-tagged were negatively affected. If the mere act of picking up a mussel can have negative consequences, how can we ever hope to study any species and not affect it?

As technology continues to improve, wildlife research will become less invasive. Today, elk collars weight about 1 kilogram, and have been designed to reduced chafing and to fall off if the animal's neck grows. Universities now have strict review boards to ensure proper animal care, and continuing applied research offers insight into the problems. Indeed, the most hands-off approach is becoming a reality: researchers can use scat-sniffing dogs to collect samples for genetic analyses, which are often as good as, if not better than, traditional mark-recapture studies. These results will be stronger, more robust, and less influenced by our presence. (Although, for now, we choose to ignore the effect of introducing Canis familiaris into our study system, and the effects of removing feces that would otherwise have enriched the soil.) But until analyzing a single genetic sample is cheaper than paying an undergraduate to pierce individuals with a five-cent ear tag, we will continue probing our systems in ways we don't fully understand. Funding agencies would do well to request more information on the effects a study design would have on the focal species—and, more importantly, provide funding for such research.

Timothy Bean is a PhD candidate at the University of California, Berkeley's department of Environmental Science Policy and Management, and an F1000 Member since 2010.