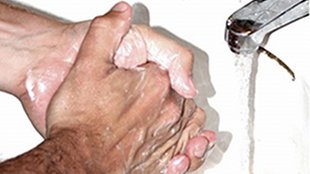 WIKIMEDIA, LARS KLINTWALL MALMQVISTThe abnormal brain activity seen in patients with obsessive-compulsive disorder (OCD) is a likely cause of the condition, according to two papers published today (June 6) in Science. Both studies used optogenetic techniques, which allow specific brain cells to be turned on and off at the flick of a light switch, to link the abnormal brain activity to OCD behavior in mice.

“It’s outstanding neuroscience in that the tandem of studies complement one another beautifully, but also in that they leverage state-of-the-art technology,” said Scott Rauch, a professor of psychiatry at McLean Hospital, in Belmont Massachusetts, who was not involved in the studies. “Both papers are exceptional.”

“These two papers have confirmed the causal relationship between [neural] circuit abnormalities and [OCD-like] behavior,” said Chris Pittenger, a professor of psychiatry at Yale University in New Haven, Connecticut, who was also not involved in the...

OCD is a debilitating condition characterized by intrusive thoughts that cause anxiety as well as compulsive repetitive behaviors. “I’m a psychiatrist as well as a researcher and I primarily treat OCD patients,” said Susanne Ahmari, a professor of clinical psychiatry at Columbia University in New York, and lead author of one of the studies, “so I’m very aware of how severe the illness is and how important it is for us to develop new and more effective treatments.” The problem is, she added, “we don’t have a very good understanding of the pathologic changes that lead to OCD.”

Brain imaging of patients suffering from OCD has revealed increased activity in the brain’s orbitofrontal cortex—a region involved in decision making—as well as in the striatum—a region associated with motor and cognitive functions. “But figuring out if there is a causal relationship is very difficult,” said Pittenger.

Because there is no way to assess cause an effect in humans, Ahmari turned to mice and to optogenetics—whereby specific types of brain cells can be switched on and off in response to light. The cells of interest were engineered to express light-responsive ion channels, such that when the cells are exposed to light—by means of a fiber optic cable pointing a laser at the relevant brain region—the channels open, ions flood in, and nerve impulses fire.

Using normal mice, Ahmari and colleagues expressed the light-responsive channel, called channel rhodopsin, in neurons of the orbitofrontal cortex that project into the striatum. “What we were expecting was that by hyperactivating the corticostriatal inputs we would directly generate OCD-like behaviors,” she said.

The team found that hyperactivation did not cause OCD behavior immediately, “but if we repeatedly stimulated those circuits for multiple days in a row we saw the progressive development of repetitive grooming behavior that was independent of stimulation,” Ahmari said. The increased repetitive grooming behavior even persisted for up to 2 weeks after the stimulation was stopped.

Along with the increased grooming, the researchers observed increased neuronal activity in the striatum, suggesting that connections between the cortical and striatal neurons may be strengthening over time by neural stimulation. They also found that treating the mice with fluoxetine, a drug used to treat OCD patients, progressively lowered both the grooming behavior and the striatal activity.

Meanwhile, Ann Graybiel, a professor of brain and cognitive science at the McGovern Institute for Brain Research at the Massachusetts Institute of Technology and senior author of the second paper, took a different approach to study the link between corticostriatal hyperactivity and OCD-like behavior. She started with a transgenic mouse that exhibited OCD-like compulsive behavior, and used optogenetics to see if she could stop it.

The mice, which exhibited excessive grooming, also showed elevated activity in cells of the striatum called medium spiny neurons (MSNs)—thus supporting the imaging studies showing hyperactivity of this region in OCD patients. MSNs are known to be inhibited by another type of striatal neuron called fast-spiking striatal interneurons, and Graybiel’s team found that there were fewer of these cells in the mutant mice. Using optogenetics to stimulate cortical cells that activate these fast-spiking interneurons, the researchers saw an immediate inhibition of the excessive grooming behavior.

On the face of it, both teams optogenetically induced hyperactivity in the striatum and appeared to achieved essentially opposite effects: induction versus elimination of OCD-like behavior. But crucially, the teams had very slightly different targets in the striatum—the general ventral striatum in the case of Ahmari’s study and the specific fast-spiking inhibitory interneurons of the centromedial striatum in Graybiel’s study, suggesting that different neural circuits send inhibitory and stimulatory signals for certain OCD-like behaviors.

“It is absolutely stunning how very precise and cell-specific these circuits are turning out to be,” said Graybiel. “You can move a millimeter and [be targeting] quite different functional control circuits.”

Figuring out how these stimulatory and inhibitory circuits are physically organized in the striatum is something the two groups plan to tackle. But, importantly, said Rauch, “they’ve been able to really delineate a pathway for compulsive behaviors in a more refined way than we’ve ever been able to do in humans, and that’s exciting because it points us in the direction of pathogenesis and pathophysiology of the disorder, but also . . . to new targets for potential intervention.”