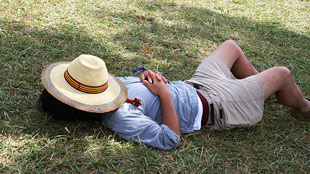 SXC.HU, KIMBERLY VOHSENPeople may be able to reimagine and reduce the power of fearful memories while they sleep, according to a study published today (September 22) in Nature Neuroscience. First, researchers conditioned study participants to fear certain pictures and smells. They then repeatedly exposed participants to the fear-associated odors while they napped. These participants later showed diminished fear of pairs of odors and images that had previously scared them. They also reported no memories of having been exposed to the smells while they slept.

Sheena Josselyn, who studies neuroscience and mental health at The Hospital for Sick Children in Toronto, said study’s setup was novel, and could set the stage for diminishing unwanted memories in the clinic. “You can learn something new while you’re sleeping,” said Josselyn, who was not a part of the study. “The brain isn’t turned off.”

Jan Born, a neuroscientist at the...

The study’s authors were inspired by extensive research showing that sleep is important for consolidating memory and by the successes of exposure therapy, which has been shown to help patients overcome fear-related disorders by repeatedly exposing them to fear-associated stimuli.

People who self-identified as skilled nappers signed up for the present study, in which they were exposed to odors such as lemon, mint, wood, and clove while viewing images of faces and, in some cases, receiving electric shocks. The participants learned to fear the paired faces and smells associated with shocks, supported by measurements of the electrical conductance of the subjects’ skin, which increases along with sweating—an indicator of fearful response.

The participants then took naps, drifting into slow-wave sleep—which has been associated with memory consolidation—while the researchers exposed them to fear-related smells. At first, when exposed to the fear-associated smells, the electrical conductance of the participants’ skin increased, indicating that the smells were activating fear-related memories. But after repeated exposure, their fear responses lessened. Once awake, the participants were less afraid of the faces they had been conditioned to fear whose corresponding odors they had been exposed to while asleep than those whose corresponding odors they had not smelled during their naps.

Functional magnetic resonance imaging (fMRI) data showed altered activity in the amygdala after subjects’ fears were extinguished. “The fact that they could see the amygdala change in how it processed the information in training versus after they’d done the extinction is very good evidence extinction was achieved,” said Josselyn.

When the researchers attempted to replicate their findings in people who were awake, they were unsuccessful at extinguishing learned fears. The researchers performed the same procedure, but rather than asking the participants to take naps, they had them watch nature documentaries.

Katherina Hauner, a postdoctoral scholar at the Northwestern University Feinberg School of Medicine and lead author of the study, suggested that a version of the technique could someday be explored for therapeutic use, perhaps as a way to enhance exposure therapy for patients with phobias.

In this study, fearful memories were induced and then extinguished relatively quickly. Hauner said she would like to see whether pre-existing memories could be similarly weakened during sleep.

Born wondered whether the team’s smell exposure technique would have the same effect on fearful memories during rapid eye movement (REM) sleep. He was part of a recent study that found participants who were allowed a full night’s sleep after fear conditioning consolidated their fearful memories more fully than people who were sleep-deprived. “It might be you see an extinguishing effect of sleep only when you examine naps, which [do not have] considerable amounts of REM sleep,” Born said.

He added that Hauner’s study is intriguing because it indicates that sleep is not just time to consolidate memories, but a “transforming process.” Memory, he said, “is reprocessed during sleep and changed.”