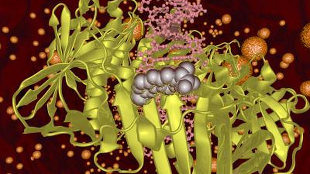 An NSAID bound to a bacterial proteinAARON OAKLEYNon-steroidal anti-inflammatory drugs (NSAIDs) are a class of compounds designed to reduce pain, fever, and inflammation. A few studies have suggested they may also possess antibacterial properties. In a paper published today (March 13) in Chemistry & Biology, researchers from the University of Wollongong in Australia have demonstrated that three NSAIDs exert weak antibacterial activity, and presented evidence that they do so by blocking the DNA polymerase sliding clamp, which is crucial for bacterial DNA replication.

“This is an interesting paper showing good evidence for biochemical inhibition of the DNA polymerase sliding clamp by a few NSAIDs,” said Thomas Keating, a principal scientist at AstraZeneca Infection Innovative Medicines in Waltham, Massachusetts, in an e-mail to The Scientist. The causal link to the observed antibacterial effects is tenuous, he added, but the sliding clamp is “an interesting, novel antibacterial target.”...

“The fact the molecules tested are NSAIDs is not of great importance, given that the activity is too weak to be useful,” added Keating. “The compounds are best viewed as leads that are quite a ways off from clinical candidacy.”

Richard Ebright, a molecular biologist at Rutgers University in New Jersey, is more critical. “I cannot be supportive about the prospect that these results will inform the design of new antibacterial therapeutics,” he said. “There is no compelling evidence that the replication-inhibitory activity is responsible for the antibacterial activity.”

Aaron Oakley, a biological chemist at the University of Wollongong and senior author of the paper, recognizes that “the story is incomplete.” But, he added, “our best explanation at this stage is that these compounds are binding to the DNA clamp.”

The DNA polymerase sliding clamp is a donut-shaped structure forming part of an enzyme that synthesizes DNA molecules from nucleotide building blocks. It serves as a critical hub for protein-protein interactions during DNA replication and repair, and is conserved across bacterial species, which makes it a promising target for novel antibacterial agents, said Oakley.

When his team screened for compounds that inhibit the sliding clamp, they found one with a chemical structure similar to that of carpofren, an NSAID used in veterinary medicine. This led them to see if other anti-inflammatory drugs might have similar effects on the sliding clamp, and to explore whether such effects could be linked to antibacterial activity.

Of the 20 anti-inflammatory drugs the team tested, five showed binding affinity with the sliding clamp of in vitro Escherichia coli. Three NSAIDs in particular—carprofen, bromfenac, and vedaprofen—showed the strongest effects. X-ray crystallography revealed that these drugs bind to the same site that many proteins need to bind to for DNA replication. The same three compounds inhibited DNA replication in E. coli, while less potent sliding-clamp binders showed much weaker effects or no inhibition.

Oakley and his colleagues said their results show that some NSAIDs inhibit DNA replication in E.coli in vitro by binding to the sliding clamp and thereby preventing other proteins from binding. However, the authors stop short of claiming that the antibacterial activity is a result of sliding clamp inhibition.

“That’s the correct interpretation in my view,” said Keating. The authors still need to establish the causal link, he added, “but given the strong structural biology in this paper and the established in vitro assays, the tools are certainly present to conduct a rational, structure-based drug design program.”

Ebright is not convinced. “The compounds analyzed have low sliding-clamp binding affinities in vitro, low replication-inhibitory activities in vitro, and low antibacterial activities in culture,” he said. The minimum concentrations required to exert these effects are “approximately an order of magnitude higher than those of typical advanceable antibacterial lead compounds,” he added.

Oakley acknowledged that the compounds are weak binders of the sliding clamp, but added that his team’s validation of a potential antibacterial target was the crux of this work. “The point is that they work at all, which shows that we can target the sliding clamp in living bacteria,” he said. “It’s early days, of course, but we desperately need new antibiotics with novel modes of action so the demonstration that the sliding clamp is a valid target could be important.” He also noted that they have developed more potent inhibitors of the DNA-clamp that have superior antibacterial activity.

In that respect, Keating cautiously agreed. “This work provides some new lead compounds,” he said. “How promising they are will depend on how quickly the potency can be improved, whether the linkage to microbiological activity can be shown, and what the unknown liabilities of the target might be.

“In antibacterial discovery, all of the hard questions and answers come later,” said Keating.