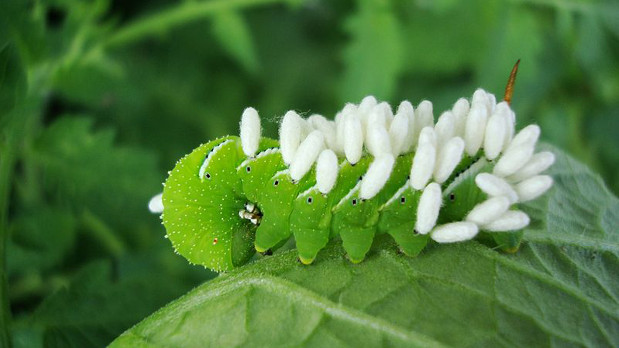 Manduca sexta and the cocoons of the associated parasitic wasp parasitoid Cotesia congregataWIKIMEDIA, 8THSTARButterflies and moths may have wasp genes in their genomes, transported via viruses that help parasitoid wasp larvae survive inside caterpillars, according to a study published today (September 17) in PLOS Genetics. Some of these genes appear to protect the host insects against other viral infections.

Parasitoid wasps lay their eggs in other insects. When the larvae hatch, the juvenile wasps consume the insect for food. One class of such wasps, braconid wasps, insert bracoviruses along with their eggs to suppress the host caterpillar’s immune response, which would otherwise attack the parasite’s eggs and destroy them. Bracoviruses belong to a group called polydnaviruses, which have been associated with parasitoid wasps for an estimated 100 million years. Now, researchers at the University of Valencia in Spain and the University of Tours in France have found...

The study “clearly demonstrates that polydnaviruses have been a source of horizontal gene transfer among insects,” entomologist Michael Strand of the University of Georgia who was not involved in the research wrote in an email to The Scientist. “Parasitoid wasps that carry polydnaviruses are an extremely species-rich group and have a life history that puts them into the position to introduce polydnaviruses into different insects.”

At first, when researchers Jean-Michel Drezen and Salvador Herrero, saw the signs of bracovirus DNA in lepidopterans, they assumed they had made a mistake. “We thought it was just a contamination,” said Herrero. When the researchers verified their results in new specimens from the field, they were surprised to find lepidopteran genes that matched bracovirus genes. Further analysis of butterfly and moth genomes confirmed that the swaths of viral DNA were flanked by lepidopteran genes.

“You can often prove that something is horizontally transferred, but you often don’t know the direction,” said Todd Schlenke, an entomologist at Reed College in Portland, Oregon, who was not involved in the research. “You can tell that the direction was from the virus in the wasp that then went into the butterflies based on how it was integrated into the butterfly genome.”

Moreover, in one species of armyworm, Drezen and Herrero, and their colleagues found that genes for C-type lectins were more like wasp lectin genes than those of other lepidopterans. The researchers also found evidence to suggest that at least one bracovirus gene in armyworms protects the caterpillars from infection by common insect pathogens called baculoviruses. “What’s surprising is that [the genes] are used by the lepidoptera and have been domesticated,” Drezen said.

Since braconid wasp victims usually die before reproducing, Drezen and Herrero are perplexed by the presence of bracovirus genes in lepidopterans. They speculate that because braconid wasps are not picky in the hosts they colonize, some wasps may have parasitized non-host species, which were able to clear the larval infection but maintained the bracoviruses genes.

“If the parasitism fails, it’s able to pass the genes from the wasp to the host and become permanent within the [lepidopteran] population,” Herrero said. And because the genes seem to proffer protective effects, they were retained over generations. “It’s a viral gene that’s been acquired to protect against another viral species,” he continued.

Strand cautioned that the evidence that lepidopterans had co-opted bracovirus genes because of their protective effects is interesting, but inconclusive. Drezen and Herrera noted that one way to confirm this would be to develop armyworms with the presumed protective genes knocked out and study the effects of baculoviruses on these mutant hosts.

The researchers consider this gene flow an ancient example of genetically modified (GM) insects, and in their paper noted the finding has implications for the use of parasitoid wasps to control agricultural pests. Some geneticists have suggested adding insecticide-resistant genes to wasp genomes, creating GM wasps that would survive sprayings in crop fields. But those efforts could backfire if genes can be transferred easily between wasps and other insects. “If we insert a gene, we don’t know where it will end up,” Drezen said. “If you put in a gene, like insecticide resistance, it could end up in the pest.”

Going forward, the researchers plan to examine a wider range of lepidopteran genomes in search of horizontally transferred genes. The insertions they found in the eight host species they studied were all ancient, occurring about 5 million years ago, so finding more recent evidence of gene transfer could help clarify how—and why—lepidopterans integrated these new genes.