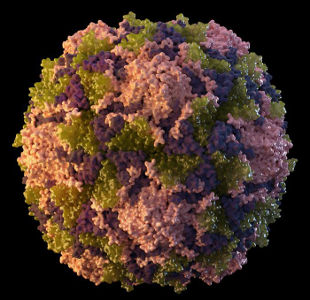 Illustration of a single poliovirus virionCDC, MEREDITH BOYTER NEWLOVE, JAMES ARCHERPolio is nearly eradicated. Now much of the risk of polio outbreaks comes not from wild poliovirus but from the oral vaccine, which comprises attenuated viruses. These viruses accumulate mutations that allow them to circulate among under-vaccinated populations, regain virulence, and even cause outbreaks. Now, scientists have mapped out a series of mutations that might explain how some cases of vaccine-derived polio can arise, according to a study published today (March 23) in Cell.

Using data from outbreaks of this circulating vaccine-derived poliovirus, researchers at University of California, San Francisco (UCSF), and Tel-Aviv University, in collaboration with others, have identified genetic changes through which they believe the attenuated oral polio vaccine re-evolves virulence. An attenuated vaccine virus genetically engineered to carry the virulence mutations that the researchers identified caused paralysis in mice.

In the past, all three oral polio vaccine (OPV) strains have reverted and caused outbreaks, but this occurs most commonly with the vaccine’s poliovirus type 2 (OPV2), as has happened dozens of times in places such as Belarus, China, Egypt, Madagascar, and Nigeria. And because wild poliovirus type 2 was eradicated in 1999, public health workers began using a bivalent vaccine that used attenuated versions of only strains 1 and 3 in April 2016. Using 424 sequences of circulating OPV2-derived virulent viruses, representing about 30 independent outbreaks of vaccine-derived poliovirus, the researchers created an evolutionary tree showing how the vaccine-derived viruses evolved in parallel from their common ancestor, the vaccine virus. Through this analysis, the researchers could also determine the order in which the virulence-promoting mutations occurred.

Originally, the researchers expected that every mutation that occurred in every outbreak would turn out to be important for their analysis. Instead, they found more than 1,000 mutations common to every branch. To home in on those mutations that had been subject to positive selection—and thus were likely play a role in viral virulence—the researchers used a mathematical model devised by Adi Stern of Tel-Aviv University. Based on this analysis, the researchers determined that the virus’s reversion to virulence occurred in three phases. First, three early “gatekeeper” mutations set the stage for viral evolution. Then, the 5′ untranslated region of the viral genome recombines with that of a human enterovirus in the gut. Finally, additional mutations—including many synonymous, or “silent,” mutations, which do not alter proteins’ amino-acid sequences—further increase viral fitness.

The changes that occur during the first two phases have been observed before, but the synonymous mutations of the third wave are novel and interesting, said lead author Raul Andino of UCSF. In evolutionary theory, he explained, synonymous mutations are thought to be under neutral selection, because “they don’t provide any benefit for fitness,” he said. “But these mutations clearly are helping the virus.”

To simulate reversion in the lab, the researchers infected HeLa cells with the OPV2 and serially passaged them until the cells had completed more than a dozen replication cycles, then sequenced the viruses to identify mutant poliovirus alleles as they emerged. They found that the same mutations identified in the viruses from the human outbreaks also developed in the cell-culture system. “There’s been an issue of, it’s not clear which markers that you identify in cell culture are most important for humans and vice versa,” said Famulare. “And so this was a really nice step towards making that relationship more explicit between human phenotype and laboratory phenotype.”

“The link between the very complex [human] situation and the cell-culture situation is provocative and interesting,” agreed Andino.

Next, the researchers engineered strains of OPV2 with the gatekeeper mutations, both individually and in combinations, to test their fitness, in viral competition assays, and their virulence, in mice. Each gatekeeper mutation increased viral fitness relative to the vaccine, and the combination of all three gatekeeper mutations was particularly hardy, proving most virulent in mice. Now Andino, in collaboration with others, is developing an OPV2 vaccine in which reversion is more difficult.

The approach the researchers used to studying the development of poliovirus virulence could also be applied to the study of other pathogens, noted Roland Sutter, the World Health Organization’s polio eradication coordinator. “The fact that they were able to do this in a very short period of time in the lab, I think, is new, and I think it really opens the way to assess this virus and perhaps other viruses as well for the future.”