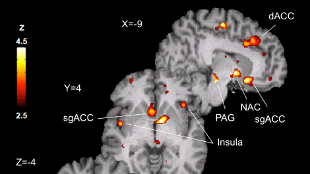 Colored areas show regions of greater mu-opioid release during placebo administration in volunteers with high levels of resilience, straightforwardness and altruism, and low levels of angry hostility. Marta Pecina/University of MichiganIndividuals who are altruistic, resilient, and straightforward show greater activity in brain regions associated with reward and are more likely to enjoy pain relief when a placebo is administered during a painful experience, according to a study reported this week (November 15) in Neuropsychopharmacology. The findings suggest that simple personality tests could be used to improve the accuracy of clinical trials by identifying people likely to skew results with high placebo responses.

“This is interesting because it’s one of the first studies to look at how personality traits are associated with placebo analgesia not only in terms of subjective reports of pain relief, but also with quite solid objective measures in key parts of the brain,” said Tor...

Placebos are known to have strong analgesic effects. In 2007, neuroscientist Jon-Kar Zubieta of the University of Michigan showed that such effects were associated with activity in the nucleus accumbens, a brain region involved in reward and pleasure. That suggested that placebo analgesia might occur in part because positive expectations of reward (pain relief) spike dopamine levels in the brain and stimulate the release of endogenous painkillers called mu-opioids.

But individuals vary considerably in their responses, and some studies have suggested that personality traits such as optimism and anxiety may predict response levels. Others have found that a composite of personality traits—including novelty seeking, harm avoidance, fun seeking, and reward responsiveness, which are thought to be related to dopamine reward circuits—can predict a substantial portion of placebo analgesic effects. Still, “there was nothing terribly conclusive,” said Zubieta.

To better understand how personality is associated with placebo analgesia, Zubieta and his colleagues assessed the personality traits of 47 healthy volunteers. Then they asked each volunteer to lie in a positron emission tomography (PET) scanner for the duration of a standard pain challenge. First, painless isotonic saline was injected into the jaw muscle and, 20 minutes later, a pain-inducing hypotonic injection. Volunteers were told about these two conditions but not the order in which they would occur, allowing for expectation of pain in both conditions. The conditions were then repeated for another scan session but this time the volunteers were given a placebo consisting of intravenous infusions of isotonic saline every 4 minutes, which they were told would reduce pain.

The PET scan recorded the activation of endogenous opioid receptors in the brain, and blood samples were taken every 10 minutes to measure placebo-induced changes in the stress hormone cortisol. Meanwhile, the volunteers were also asked to rate the intensity of the pain they felt every 15 seconds.

The researchers observed significant reductions in pain intensity ratings in response to placebo, but found that expectation of analgesia—measured by asking the volunteers during the pain challenge—was not significantly correlated with response, suggesting that positive expectations alone are not enough for a placebo-induced pain response.

But they also found that people with certain personality traits—specifically, those who scored high on resiliency, altruism, and straightforwardness, and low on measures of “angry hostility”—were more likely to experience a placebo-induced painkilling response. Importantly, such individuals also had decreased cortisol levels and greater activation of endogenous opioid receptors in brain regions associated with reward.

“We were able to link some personality traits with analgesia response at the level of brain chemistry,” said Zubieta, as well as subjective feelings. In fact, statistical analyses showed that a composite of these four traits accounted for 25 percent of the variance in subjectively reported placebo analgesic responses, and for 27 percent of the variance observed in objective measures like the activation of endogenous opioid receptors.

“Studies like this are giving us a new set of candidate personality measures that can predict for placebo analgesia, and they’re mostly positive traits,” said Wager. “So placebo responders are being cast in a much more positive light, personality-wise, than they were a few decades ago, when they were thought to be hysterical and neurotic. ”

If replicated with larger sample sizes, the results suggest that these new measures could also help to improve the accuracy of clinical trials, Zubieta added. “One big difficulty is trying to control for people with very high placebo response,” he said. “Many trials fail not because the compound doesn’t work, but because placebos are also effective, which creates noise.” By using personality measures to stratify those more likely to exhibit a placebo effect and incorporate the likelihood of a placebo response into the data analyses, researchers may be able to more effectively identify a drug’s true effect, Zubieta said.

Clarification (November 16, 2012): The introduction was changed to more clearly reflect that both the greater activity in brain regions associated with reward and the reported pain relief resulted from the placebo administered to volunteers during a painful a experience.