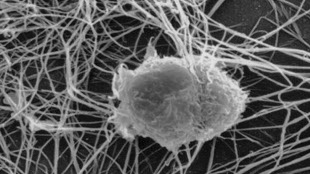 Follicular dendritic cellWIKIMEDIA, ASZAKAL Most tumors express mutant proteins not made by healthy cells, and the range of these mutated proteins varies from patient to patient. Exploiting these individual variations, a team led by researchers from the Washington University School of Medicine in St. Louis has created personalized dendritic cell vaccines using these mutated peptides, called neoantigens, which can activate a diverse range of melanoma patients’ cytotoxic T-cells in vivo.

A study assessing the immunologic effects of the vaccines—not their therapeutic benefit—is published today (April 2) in Science.

The work is an early proof of principle that immunization against these neoantigens results in patient immune responses, Nina Bhardwaj, director of immunotherapy at the Tisch Cancer Institute at Mount Sinai Hospital in New York City who was not involved in the work, wrote in an e-mail to The Scientist.

“Scientifically and immunologically, this was a tour de...

In a 2013 study, coauthor Beatriz Carreno, a human immunologist in the oncology division at the Washington University School of Medicine and her colleagues had demonstrated that dendritic cells—immune cells that present antigens to T-cells, priming therapeutic T-cells to lyse tumor cells—require a maturation step to effectively activate tumor-targeting T-cells against protein antigens overexpressed by tumors but also present in healthy cells at lower levels. “But the issue with these shared antigens is that, because they are also present on [non-cancerous] cells, the immune response is not so strong,” explained Carreno.

To identify neoantigens that are expressed only in tumor cells, Carreno and colleagues performed exome sequencing on surgical tumor samples from three patients with stage III melanoma. Using prediction algorithms, they then chose potential tumor neoantigens for each patient were chosen by identifying missense mutations found within protein-coding genes in tumor cells but not healthy cells. All of the selected tumor neoantigens resulted in amino acid substitutions within the expressed proteins.

The list of antigens was then further refined by selecting those with high affinity for the human leukocyte antigen (HLA)-A*02:0—an allele present in approximately about 45 percent of individuals of Northern European descent, a population more prone to melanoma. Seven neoantigens per patient were selected and synthesized, along with two vaccination-positive control antigens, and added ex vivo to a cocktail containing the patients’ dendritic cells to create the vaccine. The three individualized vaccines were then intravenously infused into each respective patient.

So far, the vaccinated patients have not experienced any adverse events from the innoculation.

After three rounds of vaccine administration over the course of 20 weeks, the researchers collected and assayed peripheral blood mononuclear cells collected from patients to determine the level of T-cell response in culture. Peak T-cell immunity was detected at weeks eight and nine after complete vaccination for some, but not all, of these mutant peptides.

The neoantigens used in the vaccines fell into three classes: those that had already elicited a T-cell response in the patient prior to vaccination, those that only activated T-cells after vaccination, and so-called cryptic neoantigens, which do not naturally exist as antigens, even though the tumor expresses these proteins.

The cryptic antigens are not likely to have a therapeutic benefit, but those that can elicit a T-cell response upon vaccination are likely important to increase the breadth of the antitumor response, said Carreno.

A hurdle for creating an efficacious cancer vaccine is that the immunogenicity of a particular antigen remains uncertain until it’s tested empirically. “We need to improve the immunogenicity predicting algorithm by training the algorithm based on real data obtained from patients’ responses,” said study coauthor Elaine Mardis, codirector of the Genome Institute at Washington University.

As previously observed in other studies of non-personalized dendritic cell vaccines, the level of T-cell immunity seen with fresh, unstimulated blood samples was only slightly higher compared to pre-vaccination blood samples in the study.  “The T-cell immunity found in the blood post vaccine was quite modest, so the clinical utility of this [vaccine] is far from clear,” said Weber. In its current state, the procedure is somewhat limited because advanced melanoma patients do not have multiple months to wait on vaccine production, he added.

“Anyone who naively thinks this is immediately translatable into a clinical trial that will benefit a large number of melanoma patients is not correct,” said Weber.

Bhardwaj agreed. Whether these neoantigen responses translate into therapeutic benefit and if such responses will correlate with a protective effect for patients is still not clear, she noted.

But, the vaccine may still prove efficacious, said Carreno. “There were activated T-cells in the blood after vaccination that were not there before vaccination—these were not high in number, but they were there.”

“I don’t think we know how many T-cells we need to generate to a given antigen for the vaccine to be efficacious,” Carreno added. “The point is that we can now go after passenger in addition to driver mutations, [mining] a distinct pool of mutations that may have a therapeutic benefit.”