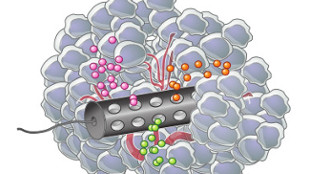 MIT-developed device with three different drugs diffusing through tumorERIC SMITHDespite advances in analyzing tumor biology, choosing effective therapies for cancer patients remains difficult. This is partly because there are still no timely, foolproof ways to test whether a patient will respond to a particular treatment. Addressing this issue, two independent teams—one at the Fred Hutchinson Cancer Research Center in Seattle and another at MIT—have developed devices that can test a tumor’s response to multiple cancer drugs directly in the patient. Both devices are described today (April 22) in Science Translational Medicine.

If validated in human clinical studies, the devices—which are being further developed by spinoff companies—could be used before surgery to help identify the best course of individualized treatment for certain cancer patients.

“[These devices] are important because they capitalize on two aspects of the cancer problem. One is the fact that we have an enormous number...

“Rather than serially treating patients until the most effective regimen is uncovered, these platforms allow fast-forwarding to the [most effective] regimen that is revealed in the tumor in which the device is planted,” noted Keith Flaherty, a medical oncologist at the Massachusetts General Hospital Cancer Center who was not involved in the work, in an e-mail to The Scientist.

The devices could also be used to select patients for clinical trials based on their localized responses to a given drug. Jim Olson of Fred Hutchinson and Seattle Children’s Hospital, whose team developed one of the devices, called CIVO, said that one small clinical trial testing the device could potentially replace several Phase 2 trials that test drugs in cancer patients without first identifying subpopulations most likely to respond to the treatment.

Right now, researchers are somewhat limited in their abilities to predict a patient’s response to certain therapies. Culturing tumor cells with a drug to test response—and resistance—fails to capture the effects of the host immune system and tumor microenvironment. Mouse avatars—murine xenografts made with a patient’s tumor to evaluate personalized therapy approaches—also have plenty of limitations, including, in most cases, time. They simply take too long to develop to be clinically relevant.

CIVO, a handheld device, can be used to deliver up to eight different cancer drugs (alone or in combination) into tumors close to the skin. Along with traceable fluorescent dye, the drugs are deposited in the center and the edges of the tumor, enabling the analysis of drug reaction in different tumor microenvironments. Following drug delivery, portions of the tumor can be excised and studied. “The system is internally controlled—allowing direct comparisons of drug responses in the same tumor,” Olson told The Scientist. “What we are looking for here is whether the cancer is inherently resistant to the drugs administered.”

Thus far, Olson and his colleagues have found that localized drug responses measured by the device are well-matched to the systemic responses to therapy observed in mouse models. An initial test in four cancer patients showed that the microinjection is well-tolerated and can induce localized responses that are easily tracked. Additional trials are now underway.

The device can also be used to streamline preclinical studies. “A [mouse] study to test the efficacy of a drug that used to take my lab a year and $250,000,” said Olson. “We can now get roughly the same information in three weeks with only a handful of mice.”

Meanwhile, MIT’s Robert Langer, Oliver Jonas, and their colleagues have developed an unnamed device that can deliver drugs to tumors deeper within tissues and be left implanted in the mass up to 72 hours, allowing the drug or drug combinations to diffuse. The cylindrical device—820 micrometers in diameter—is then removed with a coring needle and the surrounding tumor cells are analyzed. Thus far, the team has confirmed that the local drug responses within tumor microenvironments seen in mouse models of melanoma, prostate, and breast cancer mirrored the systemic responses observed in the same models.

Jonas told The Scientist in an e-mail that his team is now working to further miniaturize the device and planning clinical trials. The end goal is to provide oncologists with treatment recommendations within a day, he said.

“This technology is ideally suited for cancer types, such as lymphoma and breast cancer, for which there are multiple FDA [US Food and Drug Administration]-approved therapies or combination regimens,” said Flaherty.

Both devices have their limitations. For one, they’re not at this time meant to evaluate long-term drug response or resistance. And they can’t be used to evaluate local response to therapies delivered as prodrugs, which must be activated in the liver, noted Coombes. Further, the devices are designed to treat the bulk of the tumor mass and may not reach sparsely distributed pockets of cancer cells, he added.

To Flaherty’s mind, these devices show greatest potential for evaluating the potential efficacy of both approved and investigational cancer treatments that may be effective for a given cancer patient, but may not have been tested in a conventional clinical trial.