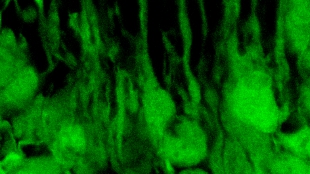 “In the past, people actually thought that the lack of [sexual] reaction to young was due to the lack of pheromones. No pheromones, no behavioral responses—that was the common thinking,” said neuroscientist Roberto Tirindelli of the University of Parma in Italy, who did not participate in the study. “Now, for the first time, they show that there is a specific pheromone which is actually active, preventing sexual contact. The inhibition of sexual contact is due to the presence of...

In the last several years, researchers have begun to identify more and more putative pheromones in mice. Specifically, three large gene families, including ESPs, have been recognized to activate the vomeronasal organ (VNO), an olfactory structure located just above the roof of the mouth. But identifying the functions of these dozens of compounds has proven much harder. The first study to link an ESP to function, for example, was published in 2010, when the University of Tokyo’s Kazushige Touhara, an author on the present study, and colleagues found that ESP1 induces lordosis, a sexually receptive posture in females.

Interested in better characterizing the growing number of compounds that may be mouse pheromones, Stephen Liberles’s lab at Harvard Medical School developed a screen to look for differential expression of pheromone homologs across mice, already identifying a predator odor found in carnivores that causes an avoidance response, and an attractive mouse odor. But when the researchers identified a compound that was expressed almost exclusively in juvenile mice, they were intrigued.

Without any preconceived notion of what a juvenile compound might be doing, Liberles’s group “took a Jane Goodall-inspired approach, where we just observed the behavior” of adult males with young mice. They compared wild-type mice with males harboring a genetic mutation that resulted in a largely dysfunctional VNO. Surprisingly, these knockout males displayed increased sexual behavior towards the juveniles. David Ferrero, the graduate student who ran the experiments, told Liberles that he “had never observed a stronger [behavioral] effect in any of his research,” Liberles said. “It was a very striking phenotype . . . suggesting that the juveniles were releasing some sort of protective pheromone that blocked these normally unproductive advances.”

The team confirmed the findings observing the interactions of adult males with juveniles from strains that did not express ESP22. Sure enough, without the behavior-suppressing signal, the males tried to mount the young mice. Painting ESP22 onto the mice inhibited the sexual behavior, however.

“[It’s] a pretty unique finding,” said geneticist Robert Karn of the University of Arizona College of Medicine, who was not involved in the work. “The little bit of juvenile-adult interactions [studied so far] seem to work the other way,” he noted, such as evidence that newborn mice use pheromones secreted in their mother’s milk to help find their first meals. “In this case, it appears that the signal is being produced in the pups [and eliciting] a behavioral response [in the adults]—or, you might say, a lack of behavioral response.”

“I think the data is quite convincing,” added C. Ron Yu, neuroscientist at the Stowers Institute for Medical Research, who recently authored a feature story on mammalian pheromones in The Scientist. “By painting an exogenously expressed peptide directly onto the mouse and inhibiting mating, that is quite striking.”

Electrophysiology and immunohistochemistry analyses confirmed that ESP22 activated a small subset of cells in the VNO and revealed downstream processing in the medial amygdala, a bit of a pheromone “hub” that mediates a range of behavioral responses, said Liberles, who noted that one direction of future research will be to further dissect the neural circuitry underlying such behaviors. Additionally, the researchers would like to identify the receptor that ESP22 binds to in the VNO. “We don’t understand how instinctive neural circuits are formed,” said Liberles. “So I think if you know what receptors are responding to these cues, that sort of gives you a handle on the neural circuit.”

And there are still dozens of other putative pheromones to be further explored, meaning more age-related compounds will likely be uncovered. “We know that male pheromones in mice are incredibly complex,” said Liberles. “There’s not a single cue that indicates maleness. I think something similar could occur with age.”

“I’d be very surprised if there weren’t [more],” agreed Karn.