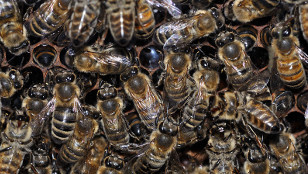 WIKIMEDIA, QUARTLA newly hatched female honeybee larva can develop into either an egg-laying queen or a sterile worker. One determinant of a female bee’s social caste, it turns out, is the insect’s early-life diet. Future queens are fed nothing but royal jelly, a glandular secretion of so-called nurse bees, which feed both the larvae and the queen; queens continue this exclusive royal jelly diet throughout their lives. Future worker bees, on the other hand, are only fed royal jelly for their first three days; after that, they eat royal jelly mixed with fermented pollen, called beebread, and honey. Precisely what about these honeybee baby foods might help determine their developmental fates has long been an open question.

Consumption of the phytochemical p-coumaric acid, a phenolic substance found in beebread and honey but not in royal jelly, may be one factor that leads female larvae to become worker bees,...

“The authors clearly show that p-coumaric acid represses genes that have been found in other studies to be associated with queen development,” Peter Dearden, a geneticist and bee researcher at the University of Otago in Dunedin, New Zealand, who also was not involved in the work, wrote in an email. “Current models of caste development in bees rest on the idea that royal jelly contains a substance or substances that trigger, or enhance queen development. The development of different castes then rests on differential feeding of royal jelly.”

“This paper doesn’t directly challenge this model,” Dearden noted, “but shows that a component of the diet which is excluded from royal jelly represses genes involved in queen development.”

The researchers happened upon their results indirectly, said lead author May Berenbaum. The present study began as a follow-up to a 2013 study, in which Berenbaum’s lab found that p-coumaric acid strongly activated genes involved in detoxification and immunity in adult worker bees. So the researchers wondered whether the chemical might also upregulate detoxification genes in larvae.

To find out, they raised two groups of larvae: one on a standard bee diet—royal jelly plus extra sugars and yeast extract—and another on the same diet plus p-coumaric acid. After three days, Berenbaum and her colleagues isolated RNA from the larvae, sequenced it, and then compared gene expression between the two larval groups.

Polymers of p-coumaric acid are the main compound of pollen-grain walls, and p-coumaric acid monomers are released when the pollen is fermented into beebread. Also found in honey, the phytochemical is “in almost every bite that a bee eats—except for queens and queen-destined larvae,” said Berenbaum.

Considering the data suggesting p-coumaric acid might repress queen development, the researchers next raised two groups of larvae on a diet of royalactin—the main protein in royal jelly (and a standard diet for in vitro queen-rearing)—with or without the addition of p-coumaric acid. This time, they let the bees develop through the larval and pupal stages until the bees emerged as young adults. The researchers then compared ovarian development between the two groups. Bees exposed to p-coumaric acid during developed had smaller ovaries than those reared without the phytochemical.

The result supports the idea that consumption of p-coumaric acid, along with other phenolic compounds found in honey and beebread, leads to “a form of chemical castration” of future worker bees, the authors wrote in their report. But p-coumaric acid is probably only part of the caste-determination story, Berenbaum added.