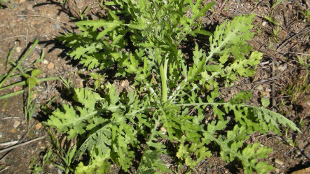 P. hysterophorusWIKIMEDIA, ETHEL AARDVARKThe invasive weed Parthenium hysterophorus, native to the American tropics, could hinder the fight against malaria in East Africa, where the plant is spreading fast. Researchers from the Nairobi, Kenya-based International Centre for Insect Physiology and Ecology (ICIPE) and their colleagues have found that P. hysterophorus can sustain the malaria-transmitting mosquito Anopheles gambiae even in the absence of a blood meal. The team’s results were published in PLOS One this month (September 14).

In a small study, ICIPE’s Baldwyn Torto and his colleagues found that the malaria vector A. gambiae was highly attracted to and fed frequently on P. hysterophorus. While the weed can be toxic to humans and livestock, the mosquito is able to ingest the plant’s poison without suffering negative effects. Researchers do not yet know why.

“This is possibly because mosquitoes are continuously being exposed to a wide range of...

Mosquitoes are known to feed on the nectars of various plants to sustain their hunts for blood meals and searches for mates, so the continued spread of the invasive weed in East Africa could hamper malaria-fighting efforts, the researchers noted. It’s not yet clear how P. hysterophorus toxins may impact mosquitoes infected with the malaria parasite.

“We are presently working with a team at Johns Hopkins University to address this question,” said Torto. “We are also currently investigating how tolerance of mosquitoes to toxins of the weed can influence their resistance to existing insecticides.”

Charles Mbogo, president of Pan-African Mosquito Control Alliance, said the finding that A. gambiae feed on P. hysterophorus could significantly impact malaria-control efforts on the continent. “This discovery will significantly help in war against malaria and at a time when we are looking for alternative tools to combat malaria,” said Mbogo, who is affiliated with ICIPE but was not involved in the work. “For instance, if mosquitoes preference for this weed is good, then it can be used to develop sugar baits to lure mosquitoes and then kill them.”

“[In] looking for new approaches, strategies in combating malaria and other pathogens . . . we need to tackle challenges including insecticide resistance and shifting behavior of malaria vectors,” he added.

Mbogo made clear that the researchers did not find evidence to suggest an association between the spread of this invasive weed species and increased incidence of malaria.

Still, Arne Witt, head of invasive species at the Centre for Agriculture Biosciences International in Nairobi who was not involved in the research, called for concerted efforts to control the weed, noting that the plant has infested some 2 million hectares in Ethiopia alone. “We will be introducing a number of agents over the next few years,” Witt told The Scientist. “This is a tough weed and, as such, we will require a number of host specific and damaging agents.”

To Torto’s mind, this study is an important first step toward better understanding how local flora might affect vector-borne disease transmission more broadly. “Since this is the first evidence of the interaction of invasive weeds and malaria, it would be interesting to investigate the impact of other invasive weeds, not only on malaria mosquitoes but other insects that transmit infectious diseases,” added Torto.