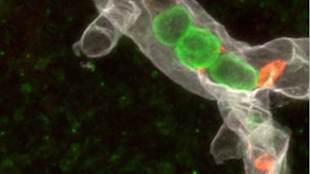 During a local inflammatory response, white blood cells called neutrophils bind to the sides of blood vessels and crawl along them. This allows neutrophils to migrate toward infection: the cells find favorable locations to exit the blood vessels and migrate into infected tissues, where they engulf pathogens. Initiating this process requires that activated platelets bind to a protein called PSGL-1 that neutrophils project into the blood stream like antennae, according to a paper published today (December 4) in Science. When neutrophils are unable to bind to platelets, they fail to migrate normally, and inflammation is reduced.

“It’s a very interesting concept that platelets would be so important in inflammation and in regulating neutrophil biology,” said Paul Kubes, an immunologist at the University of Calgary in Canada who was not involved in the study. “I think people are starting...

Study coauthor Andrés Hidalgo, an immunologist at the Spanish National Center for Cardiovascular Research (CNIC), refers to the interaction between neutrophils and platelets as a checkpoint: it confirms to the neutrophils that there has been an insult to the body. Inflammatory cytokines spur the lining of the blood vessels to become activated and the neutrophils to bind them, but this alone is not sufficient to activate the full inflammatory response. The presence of activated platelets indicates a vascular injury. “It’s not only that . . . the vessel gets activated in this local place were you get the injury,” said Hidalgo. “You need the circulation to tell you something is really wrong.”

Epidemiological and animal data have increasingly indicated that platelets are involved in pathological inflammation. In fact, aspirin works to prevent heart attack because it interferes with platelets. The researchers sought to visualize the relationship between neutrophils and platelets using intravital microscopy, which can be performed on living animals.

The researchers examined the cremaster muscle—which covers the testicles—in anesthetized mice. When they treated the mice with the cytokine tumor necrosis factor α (TNFα) to induce inflammation, as expected, the neutrophils were recruited to bind to the walls of inflamed blood vessels. This triggered the neutrophils to become asymmetrical, with leading and trailing edges outfitted with different sets of proteins.

The researchers noticed that the neutrophils tended to stick their trailing edge out into the blood vessel interior, and that platelets frequently collided with it and stuck. When the researchers knocked out the ligand PSGL-1 in mice, the platelets no longer bound the neutrophils at their trailing edge. Likewise, only activated platelets expressing the P-selectin receptor were able to bind PSGL-1, indicating a role for these proteins in mediating neutrophil-platelet interactions.

When the researchers blocked P-selectin from binding to PSGL-1, they found that the neutrophils crawled much less along the inner surface of the blood vessels. Various experiments involving diminishing platelets in the blood or curtailing the activity of PSGL-1 had similar effects, indicating that neutrophils need to bind platelets through PSGL-1 to initiate normal crawling.

Since crawling is necessary for neutrophil migration through blood vessels and out into tissues, the researchers next sought to determine whether interrupting interactions between neutrophils and platelets would lead improvement in mice with inflammatory disease.

Damage in a model of acute lung injury in mice has previously been shown to be reduced when either neutrophils or platelets are not present. The researchers did intravital imaging of the lungs of mice with acute lung injury, finding that blocking PSGL-1-mediated binding of platelets leads to a somewhat lower risk of death for the mice. In mice injected with bacterial proteins, blocking these platelet-neutrophil interactions led to reduced liver damage. And blocking these interactions improved mouse response to stroke.

Finally, the researchers showed that blocking interactions between platelets and neutrophils via PSGL-1 reduced levels of neutrophil-derived extracellular traps (NETS). NETS are networks of fibers that neutrophils extrude to bind and neutralize pathogens.

“The paper itself is a tour de force in terms of the amount of imaging they’ve done,” said Kubes. However, he noted, a more thorough characterization of the effects of curtailing neutrophil-platelet interactions is merited. For one, Kubes said he would like to know whether stopping these interactions keeps neutrophils from leaving blood vessels to migrate to infected tissues.

Still, Kubes said that the effects of blocking neutrophil-platelet interactions in mouse models of vascular injury are intriguing. Hidalgo suggested that blocking these interactions in humans might help people with vascular diseases involving inflammation, such as heart disease and stroke. Specifically blocking PSGL-1, rather than having to knock out the function of platelets or neutrophils themselves, could reduce unwanted side effects of interfering with these important cells, he suggested.

Correction (December 5): This article has been updated to correct two typos in the sixth paragraph. The Scientist regrets the errors.