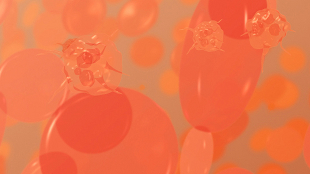 Small, spiky platelets and larger red blood cells.DONALD BLISS/NATIONAL CANCER INSTITUTEPlatelets may contribute to protection against bacterial infection, according to new research published today (June 16) in Nature Immunology. Scientists found that in the livers of mice, platelets collaborated with specialized white blood cells to capture and engulf blood-borne bacteria, and this interaction helped protect the animals from bacterial infection.

“It’s an extremely exciting paper,” said Steve Watson, a platelet cell biologist at the University of Birmingham, who did not participate in the research. Though previous research had demonstrated that bacteria can activate platelets, “this work emphasizes that platelets play a day-to-day role in innate immune defense by helping remove bacteria in the liver.”

Growing evidence suggests that platelets, in addition to slowing bleeding, contribute to protection against infection. In addition to expressing many receptors important to combating pathogens, platelets have been shown to aggregate with...

The notion that platelets may cooperate with other cells to clear blood-borne bacteria came from observations in the liver, said study lead Paul Kubes, an immunologist at the University of Calgary. While performing microscopy of specialized liver phagocytes called Kupffer cells, Kubes’ team noticed an unusual interaction between the phagocytes and platelets.

Kupffer cells sit in liver blood vessels, helping to capture and kill bacteria streaming past in the blood. Using intravital microscopy, the scientists saw that in uninfected mice, platelets performed what they termed a “touch and go” maneuver—interacting briefly with the Kupffer cells, but quickly disengaging and flowing away in the blood. But when mice were infected with certain types of bacteria—either Bacillus cereus or methicillin-resistant Staphylococcus aureus (MRSA), though not methicillin-susceptible S. aureus—the platelets formed long-term interactions with the Kupffer cells, engulfing the bacteria snagged from the blood.

The platelets, it turns out, were performing a life-enhancing function. When the researchers depleted platelets or used GpIb-deficient mice and infected them with B. cereus, these mice succumbed to infection at much higher rates. Platelet-depleted mice all died within 4 hours of infection, while over 80 percent of GpIb-deficient mice died within 4 hours—though less than 10 percent of wild type mice died at 4 hours.  Unlike wild type mice, mice lacking GpIb also couldn’t clear bacteria from their blood within 4 hours, suggesting that the platelets’ ability to interact with Kupffer cells was integral to fighting bacterial infection.

GpIb and GpIIb are “carrying members of the hemostatic repertoire of platelets—but here they fulfill an innate immune function”—highlighting platelets’ dual role, said Guy Zimmerman, an immunologist at the University of Utah, who did not participate in the study. However, he cautioned that it’s too soon to know whether platelets and Kupffer cells collaborate similarly in humans. Additionally, Zimmerman noted that the work will need to be extended to more types of bacteria, as the research focused on two gram-positive species, but many types seen by the liver will be gut-associated gram-negative species such as Escherichia coli.

If human platelets perform a similar function, patients with already-suppressed immune systems might suffer further from drugs that inhibit platelet function, such as aspirin, Kubes said. It’s an important question, acknowledged Watson. But he noted that there are many ways of activating GpIIb binding, making it unlikely that aspirin drastically affects platelets’ immune functions in healthy people. Instead, he said, the work suggests that in cases of trauma, it may be that platelets must be replaced to prevent both bleeding and infection.

Understanding the mechanism behind the platelets’ decision to aggregate on the bacteria-covered Kupffer cells could allow researchers to design a therapy to “favorably affect immune defenses without out affecting thrombotic potential,” speculated Zimmerman.