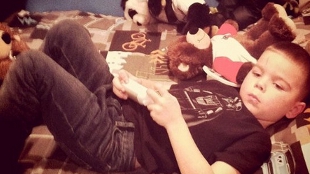 Shooting silly-looking rabbits with a plunger gun in a video game called Rayman Raving Rabbids can improve the reading ability of dyslexic children, according to a new study publishing in the March 18 issue of Current Biology—despite the fact that the game contained no reading or linguistic components. The counterintuitive finding supports the idea that dyslexia is not only a disorder of linguistic centers of the brain, but may also involve areas that govern attention and motor skills.

“The claim that they help dyslexic kids read is very novel and quite counter to recent research on dyslexia—which is held to be a phonological disorder that makes kids have a hard time hearing the transitions between sounds in speech,” James Gee, a psycholinguist at Arizona State University and author of several books on video games and learning, said in an email.

Despite having comparable IQs to other kids...

Furthermore, recent research suggests that dyslexia may affect areas of the brain involved in motor coordination and attention. In order to read a word, a person’s attention focuses—“like a filter or a spotlight,” said Gori—allowing the reader to ignore or inhibit the information surrounding a single word. When a reader focuses on the first letter of a word, the “spotlight” highlights the letters just beyond it, allowing the word as a whole to register. It is this component of reading that Gori thinks dyslexic children have trouble with.

There are well-accepted studies showing that an action video game “is far better for training people’s ability to focus attention accurately and stably . . . than passive observation,” John Stein, an emeritus professor at Oxford University who specialized in neurology and dyslexia, said in an email. To see if attention training, apart from other linguistic exercises, could improve reading in children with dyslexia, the researchers selected 20 children who had been diagnosed with the disorder but were not video-game players. The 10-year olds came in to the clinic and played either action or action-free segments of the Rayman Raving Rabbids video game for about 12 hours over the course of 2 weeks. At the end of the study, kids in the action-video-game group showed improved reading speed and accuracy, whereas the group playing the non-action video games did not. The level of improvement, said Gori, was “better than 1 year of schooling,” and was still apparent after 2 months without game play.

“We spend a lot of money to upgrade our internet speed. That’s because the speed of processing is really critical,” said Paula Tallal, who studies language processing at Rutgers University and wasn’t involved in the study. And that’s “what’s probably really happening,” with the children.

Gori agrees. In a sense, “doing this action video game lets you move this spotlight faster and more accurately,” he speculates.

“That action video games train attention in ways that are directly transferable to such seemingly disparate tasks such as letter recognition is remarkable—and certainly goes against common public discourse that frequently positions games in competition with reading,” wrote Constance Steinkuehler, a video-game researcher at the University of Wisconsin-Madison in an email. However, Arizona State University’s Gee cautions that the sample size was quite small for this study. Gori agrees that more research is needed and hopes to be able replicate these findings on a larger scale.

(Read more about how games are used in science, education, and medicine in our January 2013 issue.)