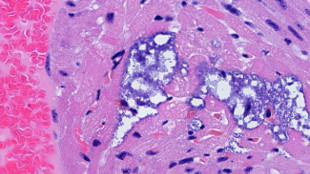 Older adults who are hospitalized for pneumonia are at high risk for heart problems. About 20 percent of patients experience complications such as congestive heart failure or cardiac arrhythmia, which have been implicated in more than a quarter of pneumonia-related deaths. Along with the low oxygen levels caused by a lung infection, stress on heart muscles may be a direct result of invading bacteria, according to a study published today (September 18) in PLOS Pathogens. Researchers from the University of Texas Health Science Center at San Antonio (UTHSCSA) and their colleagues found that mice and rhesus macaques infected with Streptococcus pneumoniae developed myocardial microlesions, which were also present in human autopsy samples.

“This is the first report in over 120 years of research with Streptococcus pneumoniae to say that the bacteria actually invade heart tissue,” added Orihuela.

In the mice, high bacterial levels in blood were associated with increased concentrations of troponin, a protein involved in muscle contraction that is a marker of damage to the myocardium. Electrocardiograms of infected mice also showed heart arrhythmias, which varied among individual animals.

When Orihuela and his colleagues examined cross sections of mouse hearts taken 30 hours after infection, they saw tiny holes, or microlesions, in the heart muscle tissue—especially in the ventricles, and often near blood vessels, hinting that the bacteria may have entered the heart tissue via the vascular system.

“These types of adverse events in the heart were previously felt to be part of the sepsis syndrome, where you have multiple organs functioning poorly, and not really a direct result of bacterial infection, but a consequence of the sepsis that is going on in the entire patient,” said Victor Nizet, an infectious disease specialist at the University of California, San Diego School of Medicine who was not involved in the study.

Remarkably, the microlesions did not contain host immune cells, which suggests that S. pneumoniae can subvert immune responses in the heart. In fact, the lesions were filled with bacteria. Although heart samples from rhesus macaques and humans who died of pneumonia contained similar lesions, these were devoid of bacteria—likely, the researchers suspected, because of antibiotic treatments. Indeed, when the researchers treated S. pneumoniae-infected mice with ampicillin, the myocardial microlesions contained very few bacteria just 12 hours later. This antimicrobial therapy caused immune cells to infiltrate the microlesions, which eventually formed scar tissue. Such scarring could help explain why some patients experience cardiac complications even after recovering from pneumonia.

To study the molecular underpinnings of microlesion formation, the team infected mice with an S. pneumoniae strain lacking the adhesin CbpA, which is known to be required for crossing the cells that line blood vessels. Animals infected with this knockout strain had lower bacterial titers and developed significantly fewer lesions than mice infected with wild-type bacteria. But the lower number of lesions was not merely due to lower levels of infection. Because CbpA works by binding to host laminin receptor, pre-treating mice with antibodies against this receptor blocked the interaction and reduced lesion formation without affecting bacterial loads. Mice lacking a platelet-activating factor (PAF) receptor, which also plays a role in bacterial entry into host cells, showed a similar response.

“These are the same mechanism by which the bacteria cause meningitis,” said Orihuela. “What’s important about that is that we have vaccine formulations that can neutralize those interactions.” The researchers found that mice immunized with fusion constructs containing parts of the CbpA protein and the bacterial toxin pneumolysin developed fewer microlesions.

This work highlights the importance of preventing pneumococcal pneumonia infections, especially in elderly people with pre-existing heart problems, according to pediatric infectious disease Stephen Pelton at the Boston University School of Medicine. “The type of vaccine that they’re describing presumably would be effective against all pneumococci,” in contrast to vaccines containing surface polysaccharides that are specific to individual strains, said Pelton who was not involved in the study and whose pneumococcal vaccine research is funded in part by pharmaceutical companies. “That would really add to the advantage or the benefit of people who have chronic disease.”

Orihuela said he is working to change protocols to make autopsies more routine for patients who die of pneumonia—together with influenza, the eighth leading cause of death in the U.S., according to the US Centers for Disease Control and Prevention. For this research, his group obtained only nine samples from a Spanish hospital, two of which showed microlesions; further confirmation is needed.

Still, he said: “This is sort of a big deal. It’s a brand new disease pathology for a very old bug.”