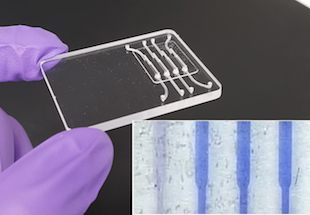 The test turns purple when the virus is present.AMERICAN CHEMICAL SOCIETY

Researchers have developed a portable diagnostic test for Zika virus infection that can be deployed in regions without access to expensive laboratory resources. The test, which involves amplification of viral RNA in a chemically heated cup and detection via a color-changing dye, was capable of detecting virus in saliva sample at a sensitivity of 5 plaque-forming units (PFU) in under 40 minutes, researchers at the University of Pennsylvania reported yesterday (June 29) in Analytical Chemistry.

“The more tools we can have for molecular point-of-care diagnostics for the Zika virus, the better,” Keith Pardee of the University of Toronto told The Scientist. Pardee and colleagues recently developed their own low-cost, paper-based Zika test.

The ongoing Zika outbreak has prompted an urgent need for cheap, portable diagnostics that can be rapidly deployed in the field. Immunoassays are often...

The University of Pennsylvania’s Changchun Liu and colleagues have now developed a Zika assay based on an RNA amplification technique called reverse transcription-loop mediated, isothermal amplification (RT-LAMP), an approach previously used to diagnose other infectious diseases. To avoid the need for electricity, the amplification takes place in a cup heated by a chemical reaction triggered by the addition of water. The products of RNA amplification are detected by a dye that changes from colorless to violet in the virus’s presence.

Liu’s team tested its assay on healthy human saliva samples spiked with inactivated Zika virus. The researchers also tested it with blood, urine, and semen, obtaining similar sensitivity, Liu said. They estimate the materials for each test cost about $2.

“Our work represents a proof of concept,” Liu wrote in an email to The Scientist. “Before the assay can be adapted for medical use, we must experiment with patients’ samples to assure that our assay and system match the performance of the gold standard (laboratory-based RT-PCR) and operate reproducibly and reliably,” he added.

Editor’s note (July 6): This article has been updated to include the study citation.