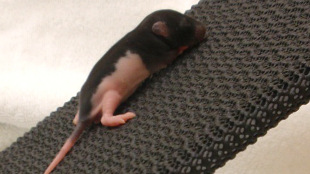 Rat pupGERLINDE METZ The history of a grandmother’s stressful environment during pregnancy can be passed on to her grandchildren, according to a study published today (August 7) in BMC Medicine. The daughters and granddaughters of female rats exposed to two types of stress per day during the equivalent of the human second trimester had shorter pregnancies of their own, and bore offspring that exhibited physiological and behavior changes. These changes could be the result of a microRNA (miRNA)-mediated mechanism, which may be epigenetically inherited across generations.

“One of the surprising findings of our study is that even if only the grandmother was stressed but not the mother, there were effects that persisted and even grew larger in the subsequent generations,” said study author Gerlinde Metz, a neuroscientist at the University of Lethbridge in Canada.

Metz and her colleagues used a rat model to study whether stress is...

The researchers stressed pregnant rats by restraining them for 20 minutes and, separately, making them swim for five minutes daily during days 12 to 18 of gestation.

Because the length of gestation was not changed in stressed compared to non-stressed rats in the first generation, Metz’s team continued to study the next three generations, similarly stressing or not stressing the female offspring during their pregnancies.

“Following phenotypes through so many generations is difficult, so this aspect alone is impressive,” Tracy Bale, a neuroscientist who develops mouse models of stress at the University of Pennsylvania Perelman School of Medicine, told The Scientist in an e-mail. “The integrative aspect of examining endpoint phenotypes while combining metabolism and physiology [measures] is excellent.”

“The multigenerational stress lineage resembles generations living in a continuously stressful environment, compared to the short-term stress affecting only one generation,” said Metz. “I think this has interesting implications for human populations, such as stress programming by migration, disasters, and poverty.”

Other groups have also shown that environmental stressors can promote epigenetic transgenerational changes, but this study uniquely examined the factors that influence preterm birth, said Michael Skinner, who studies mammalian reproduction and environmental epigenetics at Washington State University and was not involved in the work. “We don’t have a good grasp on the cause of preterm birth and this is an interesting approach to show that maybe an ancestors’ stress is promoting physiological conditions that make a female susceptible to preterm birth.”

Trying to tease out how the stress signal may be passed on, the researchers found that several miRNAs that target transcriptional regulators and genes involved in endocrine function were differentially expressed in the prefrontal cortices of female offspring from the first to third generations. Two miRNAs involved in gestational length were differentially expressed in the uteruses of female offspring from the second and third generations. And expression of an miRNA known to be altered in the placentas of women who experience preterm birth was elevated in the third-generation female rats whose grandmothers were stressed during pregnancy.

Methylation changes are known to be passed on to subsequent generations, “but we show a new mechanism, through miRNAs, that can also potentially influence health across generations,” said Metz. Whether the stress signal is directly mediated by these miRNAs to offspring must still be tested.

Still, according to Bale, because this study examined only maternal transmission, it’s not clear whether the transmission was truly transgenerationally epigenetic, or if it was simply perpetuated through repeated maternal exposure.

The team is continuing to study further generations to see if there is a limit to propagation of a stressful pregnancy history, and is examining whether miRNAs and other epigenetic changes are directly linked to the stress phenotypes. “These results are not all bad news, said Metz. “Epigenetic marks may be targets that if identified early in life, could be used to predict later disease risk and may be reversed with interventions.”

Skinner agreed. “In the future, we could map an individual’s epigenetic signature to understand exposure to prior stress and the history of stress of one’s ancestors which can show susceptibility to a disease.”

Correction (August 7): This article has been updated to correct Michael Skinner's affiliation. He is at Washington State University, not Washington University in St. Louis, as was previously written.