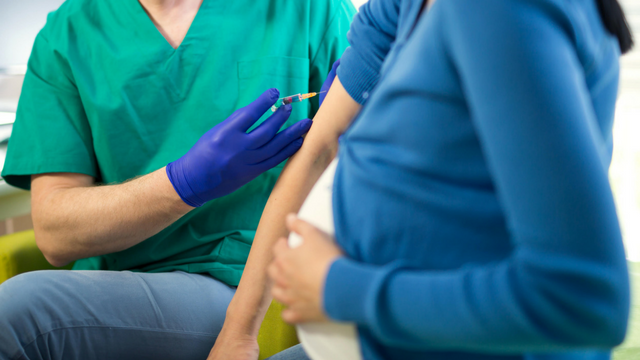 ISTOCK, JOVANMANDICWhen it comes to Zika infection, pregnant women have the most to lose. If the virus is passed from mother to baby, the debilitating effects on fetal health are irrevocable or fatal. While there are no known treatments or countermeasures against an infection, there are a handful of vaccines currently in early phases of human testing that are reportedly demonstrating promising results.

But not in pregnant women. At least, not yet.

Researchers leading current vaccine trials say that in the initial stages of testing, including pregnant women would be risky, premature, and difficult to justify to regulatory authorities. For some vaccines, however, their eventual inclusion could be on the horizon.

Vaccines in the works

The inactivated Zika virus vaccine (ZPIV) is among those currently in Phase 1 clinical trials. In this initial stage of testing, researchers are evaluating whether the vaccine is safe and can prompt an...

Women do indeed get vaccinated while pregnant—against the flu or tetanus, diphtheria, and pertussis (Tdap), for example.

From the trial’s conception, “all of us were mindful of [Zika’s] risks to pregnant women,” says Nelson Michael, director of the US Military HIV Research Program at the Walter Reed Army Institute of Research who is leading one of several ongoing ZPIV clinical trials. Although there was “tremendous interest from the very beginning” for including pregnant women, Michael says, “initially, the intent is to show immunogenicity, safety, efficacy, and to avoid women that are pregnant” until these initial assessments are made in healthy, non-pregnant volunteers.

Matthew Memoli, director of the clinical studies unit in the Laboratory of Infectious Diseases at the National Institute of Allergy and Infectious Diseases (NIAID), agrees. “We always have to test these things in a healthy population before we put pregnant mothers and their fetuses at risk.” Ideally, women would get vaccinated before they get pregnant, Memoli says, but in reality, this doesn’t always happen.

Memoli is leading a Phase 1 trial testing a mosquito-borne disease vaccine called AGS-v, which, rather than targeting the disease specifically, Memoli explains, targets proteins within the mosquito’s saliva—the first of its kind to be tested in humans. By triggering an immune response to mosquito saliva, it may be able to protect against Zika as well as dengue fever, West Nile, and malaria.

“At this moment, I do not have a plan to give this to any pregnant women,” he says, but it’s possible that, as this vaccine moves further into development, that will change. Part of that decision will be up to SEEK, he says, a partnering pharmaceutical company.

Pharmaceutical companies are always better equipped to take on the risks of later-phase vaccine and drug development, Michael says. According to him, if a vaccine were to be successful in Phase 3, the US Food and Drug Administration might be inclined to allow a trial sponsor to administer it to pregnant women during a Phase 4 post-market trial. This timeline of including pregnant women in later-phase trials is in line with the World Health Organization’s (WHO) recommendations, which named expectant mothers in its updated Zika vaccine target product profile—a document that provides a strategic plan for Zika vaccine development.

Some bioethicists, however, say there’s no need to wait. “We’re arguing that not only should you include [pregnant women], we think they ought to go first,” New York University School of Medicine bioethicist Arthur Caplan told The Scientist last month.

Scientists leading Zika vaccine development at Moderna Therapeutics say it’s best not to rush it. Physician and infectious disease expert Michael Watson, president of Valera, Moderna’s internal venture that is focused on developing the company’s novel mRNA-based vaccines, says that Moderna began enrolling healthy volunteers in a Phase 1 study for its Zika mRNA vaccine last year. Testing in pregnant women, he says, is “something we would very much want to do.” While it’s too early to put a timeline on it, Watson says the company is in the midst reviewing how and when pregnant women could be integrated into the clinical development plan.

Those who want to eventually include pregnant women in clinical trials acknowledge it will be complicated even in later-stage studies.

Allison August, Moderna’s clinical lead on its Zika program, is part of a working group of bioethicists, physicians, and immunologists who developed guidelines on how to responsibly administer the Zika vaccine to pregnant women. Their document, supported by the Wellcome Trust, urges researchers to consider including pregnant women in Zika vaccine research and development. “I think we’re on the right trajectory,” she says. But “the very premise of that guidance is that you had to have clarity with risk and benefit. . . . That’s the crux of the issue.” Because it’s an entirely new vaccine platform, regulators first have to be comfortable that the technology is safe, and they thus would have to wait until later phase trials to incorporate moms-to-be, stress August and Watson. And so far, none have made progressed past Phase 2 (see table below).

NIAID’s DNA-based vaccine is the first to advance to Phase 2 trials. Despite being furthest along in clinical testing of all Zika vaccines, “there are no plans to enroll pregnant women,” says Jennifer Routh, NIAID’s science communications editor, in an email to The Scientist.

Barney Graham, deputy director of NIAID’s Vaccine Research Center who is involved in NIAID’s DNA vaccine trial, says vaccinating pregnant women under the DNA vaccine’s current regimen of three doses, four weeks apart, would leave them vulnerable to the virus before they developed immunity. While antibody titers start increasing after the first two doses, there would still be a window of opportunity for exposure. Uncertain health consequences for mother and baby is another reason to avoid vaccinating women with experimental vaccines, Graham says, and, like Memoli, he stresses that it’s best to vaccinate women prior to pregnancy.

This uncertainty is a major reason behind researchers’ hesitancy to expose pregnant women to newer vaccines. Women do indeed get vaccinated while pregnant—against the flu or tetanus, diphtheria, and pertussis (Tdap), for example. But “the overall safety for flu and Tdap vaccines was established in very large populations prior to being administered to pregnant women,” says August.

Some vaccines—such as the flu vaccine—included pregnant women in clinical trials. And, notably, pregnant women were included in Phase 3 trials for the new respiratory syncytial virus (RSV) vaccine that prevents a devastating, potentially fatal infection that targets infants.

But recommendations for vaccination during pregnancy are not always backed by clinical trials. “Historically, many of the recommendations have relied on observational data,” writes Johns Hopkins bioethicist Carleigh Krubiner in an email to The Scientist. She, along with August, is part of the working group who wrote the Wellcome Trust-funded guidelines for Zika vaccine administration in expectant moms. In these cases, pregnant women were either intentionally or unintentionally given vaccines, then mother and child were observed.

The Zika vaccine, unlike RSV, is not exclusively targeted to pregnant women, but there’s no doubt it would benefit them. Krubiner says the guidelines she helped develop focus on the “fair inclusion of pregnant women” in such vaccine trials, “to ensure they are not excluded from the benefits of scientific advancement because of their pregnancy status.”

Those who want to eventually include pregnant women in clinical trials acknowledge it will be complicated even in later-stage studies. Nelson Michael, who sat on President Barack Obama’s bioethics commission for more than six years and helped evaluate whether to include children in an anthrax vaccine trial, points out some of the overlapping bioethical questions between these two situations, such as whether a fetus can provide informed consent.

The issue is further complicated by evidence that Zika appears to be waning. The WHO declared it was no longer a public health emergency of international concern in mid-November of last year, and an update issued this May by the Pan American Health Organization reports significantly less transmission since 2016.

“If Zika does what SARS did”—virtually disappeared—then “this will be a completely different discussion,” says Michael. While he suspects that the virus won’t go away that easily, its abatement will likely alter the conversation surrounding the inclusion of pregnant women in clinical trials.