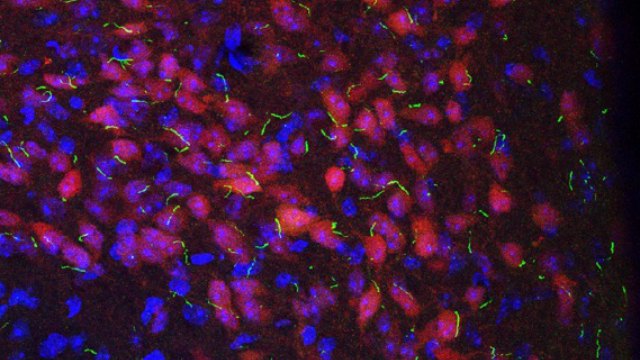 Mouse neurons (in red, nuclei in blue) in the hypothalamus and their primary cilia (green)YI WANG, PHD, FROM THE VAISSE LABMost mammalian cells have a primary cilium, an antenna-like, immobile surface projection that senses the surrounding environment. Researchers report in Nature Genetics today (January 8) that proteins localized to the cilia of neurons in the hypothalamus control food intake in mice. Furthermore, two human genetics studies published in Nature Genetics today tie variants of a neuronal ciliary gene, adenylyl cyclase 3 (ADCY3), identified in people from Pakistan, Greenland, and the United States, to an increased risk of obesity and diabetes.

“This [mouse] paper contributes nicely to a consensus that cilia are important in the brain for energy homeostasis and feeding behaviors,” says Nick Berbari, a biologist at Indiana University–Purdue University Indianapolis who did not participate in the study. “It’s interesting to think about how cilia function...

Ciliopathies—rare diseases caused by mutations in genes that affect the primary cilia—can produce a variety of symptoms, including extra fingers or toes, retinal degeneration, and obesity, coauthor Christian Vaisse, a geneticist at the University of California, San Francisco, tells The Scientist. “Relatively recently, it was found that the obesity in ciliopathies was linked to a role of the primary cilium in neurons because the genetic removal of primary cilia from all neurons in an adult mouse leads to obesity,” he explains.

Mutations in the gene that codes for melanocortin 4 receptor (MC4R)—a G-protein coupled receptor (GPCR) involved in the signaling pathway that regulates food intake—are among the most common genetic causes of severe obesity. Vaisse and colleagues found that MC4R is enriched in primary cilia in some neurons in the mouse hypothalamus, but that two genetic mutations in MC4R that have been linked to obesity in people prevent that accumulation.

“What we found here is that what seems to link ciliopathies and body weight regulation is that the melanocortin 4 receptor itself, which is this receptor in which mutation causes severe obesity in humans, is actually located at the primary cilium of those neurons in which it is expressed,” says Vaisse.

The authors also determined that MC4R co-localizes at primary cilia with ADCY3, the protein whose gene was linked with obesity among humans in the other two studies. Because it had been shown before that losing ADCY3 can lead to obesity in mice, Vaisse and colleagues then blocked adenylyl cyclase specifically in the cilia of neurons that contain MC4R. Treated mice ate more food and gained more weight than control mice. Therefore, disrupting MC4R localization to the cilia or ADCY3 signaling in the cilia can lead to obesity, solidifying the role of primary cilia in neuronal regulation of food intake and energy balance.

“This study gives us further important molecular insight into the role of primary cilia. It’s an exciting finding linking melanocortin 4 receptor with cilia and obesity,” says Ohio State University biologist Kirk Mykytyn, who was not involved in the research. “The immediate follow-up question is whether there’s actually signaling of the receptor within the cilium, but that is technically challenging to address,” he adds.

A “bigger picture [question] would be: what other behaviors can these cilia on neurons influence?” says Berbari. Because cilia are found on neurons throughout the brain, they likely impact reward networks, learning and memory, and emotional states, among others, he explains.

A question that Vaisse’s group will focus on going forward is how other genes that have been found to predispose humans to obesity could function in the primary cilium. “One of the reasons we can’t find drugs that work in most patients is that we don’t yet really understand the biology of the system well enough, and, more precisely, what happens downstream of MC4R signaling at the primary cilia,” he says. “And so once we understand this better, we might actually go find drugs that act more downstream of primary cilia signaling in MC4R neurons and that may help a larger proportion of the patients that have genetic defects in this pathway.”