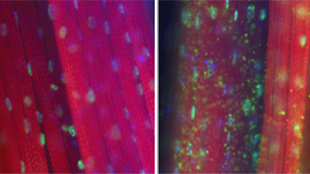 Normal hnRNPA2 stays in the nucleus of fly muscle cells (left) but mutant forms are found throughout the cytoplasm too (right)Source, J. Paul Taylor. Individuals with a rare inherited syndrome called multisystem proteinopathy (MSP) harbor misbehaving proteins that fold incorrectly, change the shape of surrounding proteins, and clump together—much the way disease-causing prions do. The results, published today in Nature, suggest that the 250 or so human proteins with similar prion-like domains may also be involved in diseases of the brain or other organs.

“It is a strong paper,” said Lary Walker from Emory University, who studies the role of misfolded proteins in Alzheimer’s disease and was not involved in the work. “They make a compelling case for the involvement of these mutant proteins in disease.”

“It is likely that seeded protein aggregation will turn up in many more diseases of the brain and elsewhere,” he added. “RNA-binding...

People with MSP suffer from a steady loss of brain, muscle, and bone tissue, as well as motor neurons. They experience the joint symptoms of several diseases, such as Lou Gehrig’s disease (ALS), Paget’s disease of bone, and frontotemporal dementia.

The causes of MSP are largely mysterious. Earlier studies have shown that mutations in a gene called VCP could lead to MSP, but J. Paul Taylor of St. Jude Children’s Research Hospital came across two families with many affected members and no signs of VCP mutations. His team, co-led by James Shorter from the University of Pennsylvania, sequenced their exomes and identified new variants that were found only in the affected individuals—one in the hnRNPA2B1 gene and another in hnRNPA1. When introduced into mice and flies, they caused the same type of muscle loss seen in human MSP patients.

Both mutations converted the amino acid valine to another amino acid called aspartate, and both affect parts of the proteins that are similar to domains in prions—infectious misfolded proteins that also clump together and cause brain diseases. These “prion-like domains” are found in some 250 human proteins, and this study is the clearest indication yet that they might play a role in disease.

Prion-like domains typically take on a loose and unfolded shape, but key mutations allow them to act as molecular zippers. When they find a partner, they zip up, transforming from a floppy, disordered structure into a rigid molecule, turning otherwise free-floating proteins into large clumps. Similarly, the mutant proteins identified in the new study can also force normal versions of hnRNPA2B1 and hnRNPA1 proteins into a more ordered structure and seed fresh clusters.

In normal physiology, proteins with prion-like domains assemble together to create temporary structures called RNA granules, which are necessary for controlling RNA. For example, during stressful conditions, RNA granules shut down the use of unnecessary genes by trapping the relevant RNAs. When conditions are better, the granules disassemble and free their trapped payload. Shorter and Taylor suspect that the two mutations they discovered stop the granules from disassembling, “which ultimately leads to disease,” the duo said in an e-mail to The Scientist.

Shorter and Taylor think that studying more families with MSP may help to reveal the role of other proteins with prion-like domains. “We have now identified about 2 dozen similar families, mostly referred by clinical colleagues, and we are sequencing them right now,” they said.