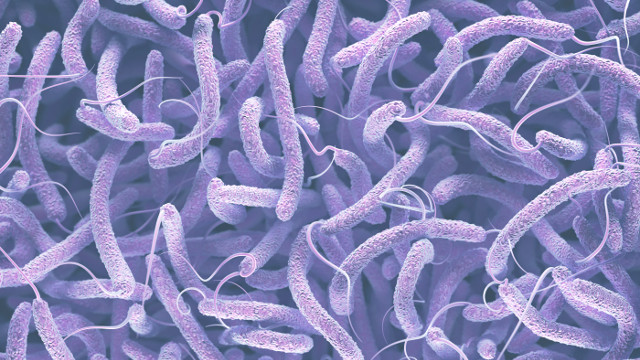 ISTOCK, KTSIMAGEFollowing any vaccination, there is normally a delay of a week or two before protection kicks in, during which time the immune system is gearing up its adaptive response. But a potential new cholera vaccine—created by genetically engineering a nontoxic version of the Vibrio cholerae bacteria—has been shown to exert a probiotic effect that protect rabbits from lethal disease just one day after inoculation.

This probiotic form of protection against cholera also works in mice by giving them Lactococcus lactis bacteria, which is normally found in cheese. Both studies were reported in Science Translational Medicine today (June 13).

“Many times we’ve thought that we’ve conquered cholera,” says Robert Hall of the National Institute of Allergy and Infectious Diseases who was not involved in either research project. But despite the existing vaccines and public health interventions, he says, “still cholera is this huge problem . . . so,...

The bacterium V. cholerae infects between 3 million and 5 million people worldwide each year and kills up to 130,000 of them, mainly in low-income countries. While vaccines have been developed, the ones in use have limited efficacy. For example, the most commonly deployed vaccine—an orally administered killed cholera bacteria given in two doses, 14 days apart—protects adults reasonably well, but does not work in infants and children, possibly because of their immature immune systems or because existing enteric infections interfere with the vaccine. The long waiting time between doses can also be problematic if trying to protect people during an ongoing epidemic. A live vaccine, based on a weakened version of V. cholerae, also exists, but was developed from a strain of the bacteria isolated in the middle of the 20th century that is no longer globally dominant.

In short, “there’s a need for a better cholera vaccine,” says infectious disease and international health researcher William Petri of the University of Virginia who also did not participate in the research.

Diarrheal disease researcher Matthew Waldor of Harvard Medical School and his colleagues have now risen to the challenge. Reasoning that live bacteria produce the strongest and most long-lasting immune responses, Waldor’s team used genetic engineering techniques to create a safe version of the V. cholerae strain responsible for the 2010 outbreak in Haiti.

“We did nine different genetic manipulations,” explains Waldor, which included deleting the toxin genes and introducing a CRISPR system that would destroy such genes should they be reacquired from wildtype bacteria in the body.

“It has been made with exquisite genetic manipulation techniques,” says Hall, “but that doesn’t necessarily mean that it is better [than the existing vaccines]. That has yet to be established.”

After administering the bacteria to infant rabbits, Waldor’s team observed that the microbes rapidly colonized the animals’ intestines yet did not induce disease symptoms, indicating the vaccine’s safety.

“It showed amazing insight on the part of the investigators that they challenged the rabbits very early on,” says Hall, “nobody else has done that.” The result, he adds, was “a fascinating observation and . . . if it does turn out to be true in humans, that would be a major advance.”

The hope, says Waldor, is that “this probiotic activity would provide protection until the adaptive immune response clears the vaccine and imparts long-lived, even life-long, protection.” Whether the new vaccine can confer such long-term protection, however, has not been tested.

In the other study on mice, MIT’s Jim Collins and colleagues describe a similar probiotic-based protection against cholera achieved by pretreating mice with Lactococcus lactis—a bacteria that naturally occurs in fermented dairy products such as buttermilk and cheese.

The discovery was rather unexpected, says Collins. The team had been using these harmless bacteria to engineer a cholera-sensing strain that could be used for V. cholerae surveillance during outbreaks. When fed to mice, the engineered bacteria cause a noticeable color change in fecal samples only if cholera bacteria are present.

But when mice were given wildtype L. lactis with V. cholerae, the animals did not develop disease symptoms as expected. “It really was a bit of a serendipitous discovery,” Collins says, “so we jumped on it right away.” Indeed, the team went on to show that V. cholerae, which are sensitive to acid, are prevented from colonizing the small intestine when L. lactis, which naturally produce lactic acid, are also there.

“The nice thing about both of these papers is that there’s no use of antibiotics,” says Petri. However, “what we don’t know is how well adapted is [L. lactis] for living in the human intestine, . . . how long does it stay in the gut, and how long does it have an anti-cholera effect? Is it six hours or six months?”

While it is unknown whether or not the results with L. lactis or the engineered cholera will be reproducible in humans, if they are, says Collins, it begs the question, “are there other [diseases] where you might use a probiotic in place of an antibiotic to put an infection in check?”