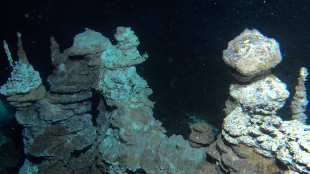 Hydrothermal vent near where Loki was found in marine sediments UNIVERSITY OF BERGEN CENTRE FOR GEOBIOLOGY, R.B. PEDERSENA newly identified group of deep sea-dwelling microbes has been classified as archaea—prokaryotic, primitive microorganisms. But these microbes harbor a suite of genes found in eukaryotes which are typically used to remodel intracellular membranes to form vesicles, or for phagocytosis. This “genomic starter kit” could have enabled ancestral forms of these microbes, named Lokiarchaea, to evolve into more complex eukaryotic cells, according to results published today (May 6) in Nature. The discovery supports the long-standing hypothesis that archaea are the ancestors of eukaryotes, and helps fill an evolutionary gap between the two groups.

“This is the most exciting and important paper on big questions about eukaryotic origins and the tree of life in years,” said evolutionary biologist Jeffrey Palmer of Indiana University, Bloomington, who was not involved with the work. “This...

Since the late 1980s, all life forms have been split into three groups on the phylogenetic tree of life: bacteria, archaea, and eukaryotes. Eukaryotes and archaea have long been considered “sister groups” based on similarities in their genes and metabolic pathways. But it wasn’t clear whether eukaryotes and archaea shared a common ancestor, or if eukaryotes originated within a subset of archaea.

Thijs Ettema of Uppsala University in Sweden and his colleagues identified the new group of archaea while analyzing the genomic diversity of marine sediments found near a mid-Atlantic hydrothermal vent called Loki’s Castle. Initial sequencing revealed that these microbes belonged to one of the most abundant groups of marine archaea, none of which have been cultured or sequenced.

Using deep metagenomics techniques, Ettema and his colleagues then assembled a 92 percent complete, 5.1 mega base pair composite genome sequence for Lokiarchaea. Approximately 175 predicted proteins in these microbes were most similar to eukaryotic proteins involved in phagocytosis, cell shape formation, and membrane remodeling. Moreover, phylogenetic analysis revealed that eukaryotes clustered within this archaeal group rather than as a related branch on the tree.

“When we first started looking at these data, we realized that this is either something very special or this is some kind of weird contamination,” Ettema told The Scientist.

“If we look at the genetic backbone of all the housekeeping genes, Loki [is] very much archaeal,” he explained. “But somewhat to our surprise, Loki ended up together with eukaryotes, meaning that . . . they share a common ancestor.”

The researchers found no signs of contamination. The eukaryote-like genes were flanked by prokaryotic sequences, Lokiarchaea carried many other archaeal features, and the sediment sample appeared free of 18s rRNA sequences—a characteristic of eukaryotes.

The researchers found that the Lokiarchaea genome contains five actin homologs that are more similar to eukaryotic actins than to archaeal actin-like proteins. Nearly 70 homologs of Ras-family small GTPases were also found, accounting for approximately 2 percent of Lokiarchaea’s predicted proteins. These proteins are found at similar levels in many unicellular eukaryotes. The researchers also found sequences similar to eukaryotic ESCRT genes in the microbes; these proteins are key components of intracellular vesicle trafficking mechanisms.

“If we look at the type of eukaryotic genes that Loki has, it could be that it was at a stage where it started evolving a primitive way of taking up stuff via phagocytosis,” said Ettema. “It is a modern-day organism, but it seems to tell us a bit about the steps that occurred during eukaryote origin.”

Among other possibilities, “it could have started evolving a mechanism to take up things—one of those might have been alpha-proteobacteria, from which mitochondria evolved at some point,” he added.

The functions of these eukaryote-like genes in Lokiarchaea remain unknown; although similar in sequence, the archaeal genes may be involved in different cellular processes. In future work, Ettema and his coauthors will attempt to culture and visualize these microbes in the lab.

To evolutionary biologist Andrew Roger’s mind, it is unlikely that this vast collection of genes is non-functional. “We can’t say for sure, but genes don’t hang around in organisms for a long time without being mutated into junk unless they’re expressed,” said Roger of Dalhousie University in Canada, who was not involved with the study. “We don’t know the precise functions, but I’d be surprised if these organisms didn’t have some kind of endomembrane and cytoskeletal system. The sheer number of these proteins is a pretty clear smoking gun.”

“In the field of the origin of eukaryotic cells, this is probably one of the biggest new discoveries that we’ve seen for 30 years or so,” Roger added. “It’s a true so-called missing link between archaea and eukaryotes.”