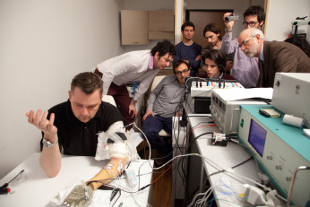 Sørensen wearing sensory feedback enabled prosthesis in Rome, March 2013.LIFEHAND 2/PATRIZIA TOCCIResearchers surgically implanted electrodes into the upper-arm nerves of a man whose limb had been amputated at the forearm, partially and temporarily restoring his sense of touch and improving his ability to operate a motorized prosthesis, according to a paper published today (February 5) in Science Translational Medicine. The electrodes responded to sensors on the prosthetic hand and stimulated the upper-arm nerves that once extended down the limb, making the user feel like sensation was emanating from his missing hand. The device enabled the man, a 36-year-old amputee from Denmark named Dennis Aabo Sørensen, to apply varying levels of force with the prosthesis, and to distinguish between objects of varying shape and stiffness, even while unable to see what he was doing.

“For the first time, the amputee was able to modulate the force produced by...

“I think this study sort of paves the way to start leveraging what we know about neural coding to create increasingly naturalistic sensations and to start restoring touch in its multidimensional richness,” said Sliman Bensmaia, a neuroscientist at the University of Chicago who was not involved in the study.

Sørensen’s lower arm and hand were amputated below the elbow about 10 years ago following an accident involving fireworks. Since then, he has become adept at using a motorized prosthetic hand activated by muscle contractions.

After amputation, nerves that once innervated the amputated limb remain intact above the amputation site, and stimulating these nerves can recreate sensations that the patient perceives as coming from the missing hand. In January 2013, surgeons at Gemelli Hospital in Rome performed a seven-hour surgery on Sørensen to implant microelectrodes into the median and ulnar nerves in his upper arm. The ulnar nerve corresponds to the pinky and part of the fourth finger and palm, while the median nerve transmits feeling to the thumb and remaining fingers and palmar area.

Following extensive mapping of Sørensen’s sensations in response to electrical current, the researchers attached a motorized prosthetic hand to his stump. The new prosthetic hand is equipped with tension sensors that measure force being applied by the index and pinky fingers. The force data are then translated into electrical current via a computer algorithm, producing sensations that the user perceives as coming from his missing hand.

Usually, the challenge of operating a motorized prosthetic hand is that it has no sensation; users must watch its movements and listen to its motor carefully in order to adjust their grasp accordingly. For this study, Sørensen wore an eye mask and ear buds to eliminate these aural and visual aids. First, he showed that he was able to apply three distinct levels of force while grasping a pressure sensor chamber with his prosthetic hand. When the researchers turned off sensory feedback without telling Sørensen, his performance suffered, indicating that he was indeed relying on the sense of touch to perform the tasks.

The researchers also found that Sørensen was able to judge the stiffness of wood, a stack of disposable plastic cups, and a cotton pack without looking at them by grasping them with the prosthetic hand. He was also able to classify the shapes and relative sizes of a bottle, a baseball, and a mandarin orange. Finally, Sørensen was able to detect the orientation of objects in his palm and to grasp them using the appropriate fingers. 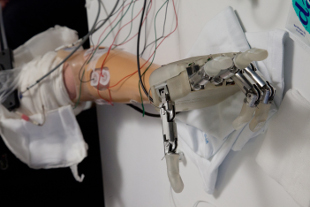 Some previous attempts at creating prostheses with sensory feedback have relied on sensory substitution, a process in which touch sensors on the prosthesis cause buzzing sensations or pressure on intact parts of the body. But prosthesis users have been reluctant to accept such devices, because they do not feel natural, said Dustin Tyler, an associate professor of biomedical engineering at Case Western Reserve University and a researcher at the Cleveland VA Medical Center who was not involved in the study.

Tyler has been working on a different approach for creating prostheses with sensory feedback. While Micera and his colleagues implanted electrodes directly into nerves, Tyler’s team is using less invasive cuff electrodes, which encircle bundles of nerves rather than penetrating them. Tyler has implanted the cuff electrodes into the arms of patients and hooked them up to prostheses that give sensory feedback, according to MIT Technology Review.

One concern about inserting electrodes directly into nerves is that the devices might damage them. But Sørensen’s nerves appeared to do well over the month that the electrodes were implanted. And six months after the end of the study and the removal of the electrodes, his nerves still appeared to be in good health. The researchers plan to next test whether their approach is viable over a longer time period. “All publications to this point have shown short-term value of the work, but have yet to show it’s a long-term solution,” said Tyler.

Coauthor Paolo Maria Rossini, a neurologist at IRCCS San Raffaele Pisana and the Catholic University of the Sacred Heart in Rome, added that his team will eventually need to miniaturize the computer system that translates the sensors’ readouts, as well as miniaturize the electrical stimulator. The devices are currently external—Sørensen had to sit next to them for the sensory feedback to function—and somewhat bulky. Eventually, the researchers hope that the entire prosthesis will be portable so that a user can wear it as she goes about her daily life.

“What’s important is that the nerve has become a viable target,” said Tyler. “This work . . . shows that the nerve is a great place to interact, and we have to work on finding the way to do that.”