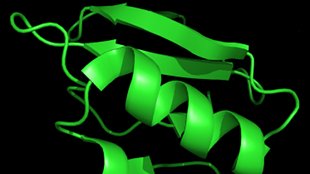 A cellular stress pathway called the unfolded-protein-response (UPR) both activates and degrades death receptor 5 protein (DR5), which can promote or prevent cell suicide, according to a paper published in Science today (July 3). The theory is that initial stress blocks cell suicide, or apoptosis, to give the cell a chance to adapt, but that if the stress persists, it eventually triggers apoptosis.

“This work has made the most beautiful simplification of all this big complex mess. Basically, they identified and pinpointed the specific protein involved in the switching decision and explain how the decision is made,” said Alexei Korennykh, a professor of molecular biology at Princeton University, who was not involved in the work.

But Randal Kaufman of the Sanford-Burnham Medical Research Institute in La Jolla, California, was not impressed. He questioned the physiological relevance of the experiments supporting the authors’ main conclusions about this key...

Protein folding in a cell takes place largely in the endoplasmic reticulum (ER), but if the process goes awry, unfolded proteins accumulate, stressing the ER. This triggers the UPR, which shuts down translation, degrades unfolded proteins, and increases production of protein-folding machinery. If ER stress is not resolved, however, the UPR can also induce apoptosis.

Peter Walter of the University of California, San Francisco, and his colleagues have now confirmed that CHOP activates DR5, showing that it is a cell-autonomous process. But they have also found that IRE1a suppresses DR5, directly degrading its mRNA through a process called regulated IRE1a-dependent degradation (RIDD). Inhibition of IRE1a in a human cancer cell line undergoing ER stress both prevented DR5 mRNA decay and increased apoptosis.

However, in an e-mail to The Scientist, Kaufman expressed concern that “the significance of RIDD has not been demonstrated in a physiologically-relevant context.”

Walter insisted that the evidence for RIDD’s existence is “crystal clear.” His only concession was that “the effects aren’t 100 percent,” he said, because “RIDD degrades mRNA by a few-fold,” making it difficult to measure.

This RIDD debate aside, the researchers have also sparked a rumpus with their finding that IRE1a expression switches off just 24 hours after ER stress initiation, leaving PERK to drive the cell toward apoptosis. “We and others have evidence that suggests another model,” said Scott Oakes, a professor of pathology at the University of California, San Francisco, “which is that both PERK and IRE1a under high stress will send out death signals.”

Whether IRE1a promotes or inhibits apoptosis under extreme stress “is controversial,” said Ira Tabas, a professor at Columbia University in New York City. But it’s essential that scientists figure it out. Cell death from ER stress is a pathological process in many major diseases, Tabas said, and there are IRE1a inhibitors in pharmaceutical development. “It is very important because under high stress you have two different views here,” said Oakes. “One is that you want to keep IRE1a on, the other is that you want to shut it off.”

Because ER stress is central to many diseases, “a lot of people are passionate about it,” said Tabas, explaining the polemic views. “Who’s right? . . . I think it depends on the context in which the experiments are done—one pathway may be important in some settings, and another pathway may be important in different settings,” he suggested. What might help to resolve the issues, he said, will be “in vivo causation studies using actual disease models.”

Researchers will continue to debate. So, said Walter, “we’ll have to see what holds-up five years from now.”