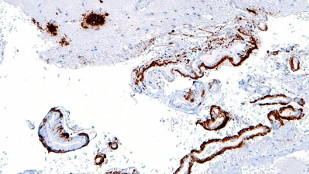 WIKIMEDIA, NEPHRONAlong with symptoms of cognitive decline, Alzheimer’s disease patients often have an accumulation of plaques and tangles of proteins in parts of their brains. But a long-standing question in neurology is why some elderly people develop dementia and others do not. Researchers are also left to wonder why some people have Alzheimer’s disease-like brain pathology yet show no cognitive symptoms.

A study published today (March 19) in Nature provides new clues that could help solve both puzzles, showing that a previously unknown stress response kicks in later in life to protect aging neurons. Researchers at Harvard Medical School found that a protein called REST, which is well characterized as a transcription factor that represses neuron-specific genes during embryogenesis, is switched on during middle- and late-adulthood, helping to protect neurons of the hippocampus and cortex from oxidative stress and the aggregated and misfolded proteins characteristic of Alzheimer’s and other...

“This work establishes REST as a regulator protein we have to pay a lot of attention to in the context of neurodegeneration,” said Susan Lindquist, a molecular biologist at the MIT Whitehead Institute for Biomedical Research, who was not involved in the study.

Analyzing brain samples from more than 300 individuals who had cognitive function ranging from normal to Alzheimer’s disease, the researchers showed that levels of REST were strongly correlated with measures of cognition. Many of the brain samples were from individuals who had died while taking part in a long-term clinical, pathological study and had undergone extensive neuropsychiatric assessments. Tissue from those individuals who retained robust cognitive function at the end of life yet also had Alzheimer’s-related plaques had three-fold higher levels of REST in their brains compared to those who had similar pathology but showed signs of dementia.

“This raises the possibility that the structural pathology may not be sufficient to cause Alzheimer’s disease,” said geneticist Bruce Yankner, who led the work. “A failure of the brain stress response, which REST might mediate, may also be required.”

REST first came to the researchers’ attention when it emerged among the most active genes in aging human cortices. Using neural cell lines, they next found that REST coordinates the activities of genes that may protect the brain from stress, upregulating the FOXO1 transcription factor—which is known to promote longevity—and binding and repressing cell death-related genes and those that mediate phosphorylation of tau and the generation of amyloid plaques in Alzheimer’s disease.

The researchers showed that while primary mouse neurons without REST were highly sensitive to hydrogen peroxide and other stressors, the REST protein could rescue the cell degeneration and cell death phenotype. Mice that lacked REST in their brains showed apoptosis and neurodegeneration in the hippocampus and cortex by their eighth month of life, but not earlier.

The researchers also identified an ortholog of REST in the nematode C. elegans, called SPR-4. SPR-4 mutants showed increased sensitivity to oxidative stress, which could be rescued by expression of either the human REST gene or wild-type SPR-4. When a spr-4 mutant was crossed with the C. elegans model that expresses amyloid-b, the resulting worms exhibited accelerated neurodegeneration. “That REST functions in C. elegans shows this system is likely deeply rooted in evolutionary biology,” said Lindquist.

Of course, there are many unanswered questions. Chiefly, whether the REST pathway is a master stress-regulator in neurons—analogous to the heat shock response in other cell types—remains to be seen.

Todd Golde, a neuroscientist and pathologist who studies neurodegenerative diseases at the University of Florida, said the study presents a compelling case that reduction of neuronal REST plays a role in the susceptibility of neurons to stress but cautioned that it doesn’t show how exactly the protein is involved in the pathological processes that lead to Alzheimer’s disease. “The unanswered question is whether it’s a key driver of the degenerative process or just one of many factors that contribute to the downstream degenerative process.”

Golde is also somewhat skeptical of the C. elegans and mouse model results. “The experiments in these model organisms show that REST has a role in stress and aging response and can regulate neuronal viability in these systems, but it doesn’t really inform on whether REST plays a neuroprotective role in the aging human brain as these are not very good models of human Alzheimer’s disease,” he said.

Yankner and his colleagues are now working on follow-up experiments to better understand whether REST is indeed a regulator of brain aging. One goal is to isolate the signals that turn REST on in the aging brain, which the researchers suggested could be linked to Wnt signaling. Another is to determine whether REST has a more general stress response function in the context of other neurodegenerative diseases, or in cases of traumatic brain injury or stroke.

The researchers are also screening compounds to target REST and other components of its defined chromatin-remodeling complex for drug development purposes.

“In addition to targeting abnormal proteins in the brain of patients with neurodegenerative diseases, our study suggests that boosting the physiological defense system may also to be important, and that a multipronged therapeutic approach might be beneficial in neurodegenerative disorders, analogous to current cancer therapies,” Yanker said.