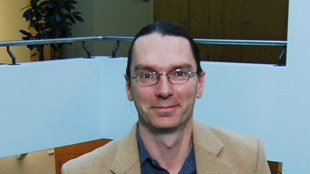 SANTA FE INSTITUTE, NICOLAS RIGHETTITraits that initially confer a selective advantage often later become beneficial in some unrelated—and often surprising—way. A classic example of a so-called pre-adaptive trait, or exaptation, is the feather, which originated for a purpose other than flight. Although numerous anecdotal examples of exaptations litter the evolutionary biology literature, it is unclear how commonplace they are. Research published today (July 14) on simulated metabolic networks, however, suggests that exaptations may in fact outnumber adaptations several-fold.

“The paper is an important effort to characterize the frequency of exaptation as an evolutionary mechanism,” Richard Blob, an evolutionary biologist at Clemson University who was not involved in the study, said in an email. “The authors have identified an effective system to begin approaching this question in a systematic way.”

Leading the research was Andreas Wagner, an evolutionary biologist at the University of Zurich, who studies evolutionary...

The Scientist chatted with Wagner about exaptations, their apparent ubiquity, and what they mean for the study of evolutionary biology.

The Scientist: Where did the notion of exaptations come from?

Andreas Wagner: Stephen Jay Gould first coined the term to describe traits that may be simple by-products of other traits. Also, Darwin said in his Origin of the Species back in 1859 that organs that serve a particular purpose may have originated for a completely different purpose. So even Darwin was aware that exaptations exist, although they didn’t have that word at the time.

TS: What are your favorite examples of exaptation?

AW: The origin of feathers, which help with stabilization during flight. But they probably originated for completely different reasons such as thermal insulation or waterproofing. There are also these fascinating proteins in our eye lens called crystallins, which originated from metabolic enzymes. At high concentrations they retain transparency, allowing nature to build lenses with high refractive indices, which are well suited to focus light.

TS: How did you become interested in the transition from pre-adaptive to adaptive traits?

AW: I consider this to be the last frontier in evolutionary biology. Natural selection we’ve known about for more than 150 years. So, we know a lot about how evolutionary innovations spread through populations, but we know very little about how they originate.

TS: Can all adaptive traits be traced to an exaptive origin?

AW: I would say the answer is yes. Gould argued very much in favor that [exaptive traits are] very frequent. And he was attacked from all sides because the common wisdom was that all traits originated for the same reason that they are still being kept around today. Nowadays, most people agree that exaptations occur and are fairly frequent, but we didn’t know whether they are more frequent than regular adaptations.

TS: What conclusions can you draw from your simulations of metabolic networks?

AW: Our work shows that exaptations exceed adaptations several-fold. Mere examples of exaptations [could not] address this question. You really need this kind of systematic approach where you study a sample of all possible metabolisms and what typical properties they have.

TS: So, evolution creates a pool of possible adaptations, only a few of which are expressed at a time?

AW: Exactly. Imagine we find a novel microbe that is able to survive on some carbon source, say citrate. Reflexively, a microbiologist would say, because citrate is an important carbon source in the microbe’s environment, that this ability is an adaptation. What our work tells us is this need not be the case. This could simply be the by-product of the ability to live on some other carbon source that we may not even have identified yet.

TS: What does this mean for the field of evolutionary biology?

AW: This opens a huge can of worms for evolutionary biologists because it becomes very hard to distinguish adaptation from exaptation.

TS: Why does it matter to have a clear delineation?

AW: If exaptations are pervasive, then natural selection—which few doubt is critical for the preservation and spreading of traits—may not be that important for the origin of innovations in life’s history.