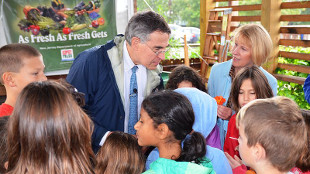 Rep. Rush Holt, USDAIn the heat of election season, scientists—and 85 percent of voters—are clamoring for candidates to explain their positions on alternative energy sources, climate change policy, and federal funding for research, among other science-related issues. But one scientist-turned-congressman wants more. Representative Rush Holt (D, NJ) doesn’t want politicians to merely think about science, he wants them to think like scientists. In a recent opinion piece in Nature, Holt argued that scientific thinking—based on logic and evidence—could improve lawmakers’ decisions on issues ranging from voting systems to air transportation security. The Scientist spoke with Holt about his thoughts on blending science into politics.

The Scientist: What inspired your opinion that scientific thinking can improve politics?

Rep. Rush Holt: It became apparent to me that my constituents like the fact that I’m a research scientist that decided to go into Congress. And I’ve been...

TS: How can we incorporate more scientific-thinking into political discussion?

RH:  In the long-term, we should have better science education. And that doesn’t mean training more scientists; it means helping non-scientists think like scientists. The real solution is to get all of the lawyers and business people—anyone who’s elected to Congress—to understand how you compose evidence-based debates and how you learn to refine your understanding of a question based on evidence.

In the short-term, I think we have to turn to scientists. They should be talking about how a person—including a member of Congress—can ask questions in an open-minded way, so that they can be answered based on evidence and subjected to criticism. It won’t be easy, obviously—it’s a tall order—but who better to do that than scientists?

TS: So are you suggesting that more scientists should be involved in politics?

RH: Well, not everyone who thinks like a scientist is a scientist. There are many people who can help broaden the debate and open people’s minds, such as engineers and other technical professionals. But, of course, the twin-prong of my argument is that scientists should be able to think politically and be engaged politically. We certainly need more of that—and people have been saying that for decades.

TS: But couldn’t having more scientists engaged in politics have its downsides, too, such as politicized scientific studies?

RH: Of course, scientists are no less arrogant or pigheaded than other humans are, but the scientific process subjects them to a public review that leads to progress, and that’s what we need.

TS: Do you think a scientific approach is always the best way to think about an issue or policy?

RH: I hasten to say that science is not the only way of knowing things. Through religion, through literature, reflection, meditation, and any number of other approaches, we gain understanding and knowledge of our world. But the most reliable knowledge—that can be applied societally, to an entire community or country—is knowledge that has been tested empirically, that is based on the leveling effect of evidence. Evidence shouldn’t depend on one’s socioeconomic status or one’s political affiliation. Evidence has a democratizing effect that is healthy for our country. It’s the most politically useful way of knowing things.

TS: After more than a decade in Congress, what have you learned about working in politics and what advice would you give to other scientists trying to encourage evidence-based debate?

RH: Trying to balance the competing interests of around 700,000 constituents—which each member of Congress has to do—each constituent with a different idea of how we should be spending our time and our money and what’s important in our society, it’s hard work. This is intellectually harder than physics; psychologically and physically harder, too. But it’s also more important, and more satisfying.

I’m a realist and a pragmatist. I don’t go around dismissing people who think illogically or who are governed by rigid ideology. You have to work with them. But I would also like to work toward the day when we have less rigid ideologies governing the debate in Congress.