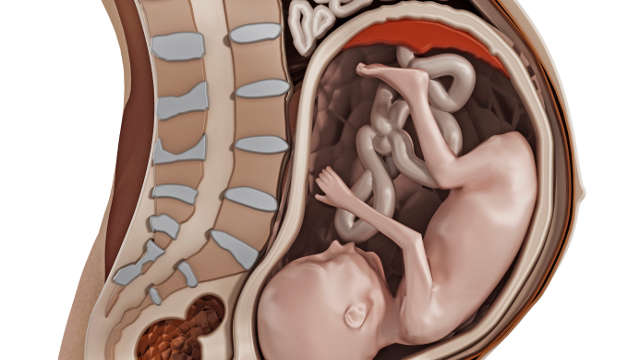 1. How does the placenta disengage from the uterus and not damage it?

2. Is it really beneficial and to what extent . . . to consume the placenta either in smooth or in pill form?

Although many animals engage in placentophagia after birth, the actual benefits for humans are still not known. Few would advocate eating uncooked, raw placenta. Most describe drying...

3. Will uterine replication technology ever become part of our near future? Would men want to experience childbirth?

Although some men may be envious of the unique experiences of pregnancy and childbirth, it is unlikely that they will get to partake in the near future. It is true that amazing advances are being made in growing certain human organs in the lab or in animals. But being pregnant requires more than just a vesicle for the fetus. Just think about the complex hormonal changes required to sustain a pregnancy; these cannot be easily recreated in a man’s body. There is also the engineering challenge of birth: even with an implanted uterus, delivering a baby would be complicated by other aspects of male anatomy.

4. How much do we know about how antibiotics affect the placental microbiome, and therefore the . . . baby’s own microbiome and development?

It used to be thought the healthy placenta was essentially sterile; we now know that bacterial communities are present at low concentrations. (See “The Maternal Microbiome,” The Scientist, May 21, 2014.)  Interestingly, the placenta does not support the same bacteria as the mother’s reproductive tract. One study indicated that the placenta’s bacterial communities have more in common with the mouth microbiome. In terms of which commensal bacteria will become the established populations in the gastrointestinal tract of a young infant, researchers believe the mother’s skin, reproductive tract, and intestines are more common sources.

5. There is a theory out there that spontaneous miscarriage in pregnancy is the mother’s body rejecting the child. If so, why would placenta abruption (with unknown reasons) occur to a healthy, low-risk mother and child after 40 weeks of pregnancy? Why would the human body, after all the work during 40 weeks of producing a healthy baby, release the placenta too soon, causing the immediate death of the baby?

Most pregnancies and deliveries go smoothly and require only routine supervision and assistance from physicians and midwives. Sadly, that is not always the case. One complication is a miscarriage due to a response by the mother’s immune system against fetal proteins. But that differs from placental abruption, when the placenta begins to detach too soon, resulting in bleeding and the risk that the baby will not receive enough oxygen. The prevalence of placenta abruption is about one in 20 pregnancies for smaller separations, which are not harmful, and approximately one in 120 pregnancies for larger separations. It is more common in the third trimester. Among the risk factors are high blood pressure, smoking, a history of placenta abruption during prior pregnancies, and carrying twins.  If placenta abruption occurs at 40 weeks (normal term), hopefully delivering the baby will avoid any lasting problems for the infant. Should a pregnancy run several weeks longer than normal, the placenta’s genetic clock—which is timed to the typical gestational length—may initiate an end to its normal functioning.