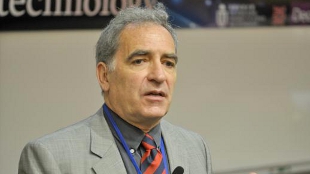 Princeton physicist Robert AustinCOURTESY OF ROBERT AUSTINCancer mortality rates have, on average, not budged for the past 40 years, despite billions of dollars in annual research expenditures. Looking for fresh insights into cancer research, the National Institutes for Health in 2009 launched 12 physical science oncology centers at universities around the United States. The funders hope cancer research, which has benefited from tools made by physicists, can also benefit from physicists’ unique perspective on cancer as a physical system.

Among the directors of these centers, Princeton University’s Robert Austin holds perhaps the most controversial perspectives on cancer. Austin, a trained physicist and a member of the National Academy of Sciences, believes we might have cancer for a reason. It’s a tradeoff, he says, for the rapid evolution our species has leveraged to become the dominant force on the planet. He also suggests that cancer might act as a...

One of the main challenges facing cancer researchers, Austin said, is a tumor’s ability to evolve resistance to chemotherapy. He thinks this trait shares many characteristics with antibiotic resistance among bacteria. To that end, his lab builds specially designed microenvironments to study how antibiotic resistance evolves.

Following Austin’s symposium talk at the February 2013 meeting of the American Association for the Advancement of Science in Boston, The Scientist chatted with him—hustling through the city’s snowy streets on the way to the train station—about the war on cancer and his unsettling views.

The Scientist: What is cancer?

Robert Austin: I have two answers. One is it may be due to a fundamental, general instability in any system which has mutations going on where you’re reproducing yourself. There’s a fundamental danger there. It’s the risk that the system is willing to accept in order to evolve.

It may also be plan B in the sense that we’re supposed to age and die. It’s very important that we die. If you take good care of yourself so the normal ways of death don’t happen, the system will go ahead and turn something else on to make sure that individual ceases.

RA: Yeah, it’s apoptosis on a large scale. That’s why the immune system gives it a pass. In fact, the body might even fight your attempts to reverse the process, because it actually wants it to happen.

TS: Are you saying that cancer is ultimately good for us?

RA: Yeah, on a species level. We all know that to evolve, we must have mutations. Cancer is more prevalent in humans, because that is the mechanism driving our rapid evolution.

TS: What triggers the transition from tumor to metastasis?

RA: I figure it’s a stress-related thing. In other words, I think the tumor slowly [comes to be in] a more stressful environment. The idea is that these tumors’ cells decide to break out and move somewhere else.

Ninety percent of all cancer deaths are due to metastatic transitions. You can usually live with most tumors. They won’t kill you necessarily, but when they metastasize, they definitely kill you.

TS: What does all this say for whether we will ever find a cure for cancer?

RA: We should stop using the word “cure.” It’s the wrong word to use. We don’t want to cure cancer. We have to have cancer [to evolve]. The hope is that you can keep cancer under control for a long enough time to die from something else without a huge loss of quality of life.

TS: Should we just give up on chemotherapy?

RA: No, no. I don’t think we should give up on chemo, per se. We just do it in a simpleminded way right now. We give patients as much as they can tolerate. Instead of trying to kill the cancer, we [should] try to maintain it.

In other words, maybe we should feed the tumor instead of starving it. Avastin was this anti-angiogenesis drug, meant to starve a tumor by cutting off its blood supply. That drug has failed miserably. These cells simply evolved the ability to survive on less blood. They actually ended up more dangerous than if they hadn’t given any drug at all. So, by starving them, we actually created an absolute monster.

TS: So, we should try to keep the tumor happy?

RA: Yeah. Keep it happy and quiet. Can we learn to do that? I think that’s not impossible.