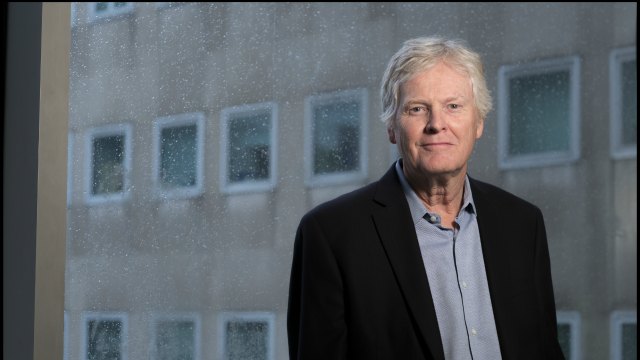 Michael Young won the Nobel prize for Physiology or Medicine for his work on circadian clocks.MARIO MORGADO / THE ROCKEFELLER UNIVERSITYToday (October 2), Rockefeller University biologist Michael Young and Brandeis University scientists Jeffrey Hall and Michael Rosbash were named co-recipients of the 2017 Nobel Prize in Physiology or Medicine for work on circadian rhythms. In 1984, Hall and Rosbash and, independently, Young, determined that a gene, period, was necessary for the maintenance of circadian rhythms in fruit flies. Young also identified two more genes that regulate period. Scientists have since discovered homologous circadian systems in mice and in humans.

Young spoke with The Scientist this afternoon.

The Scientist: In your opinion, what has been your most important scientific achievement?

Michael Young: I think if there was an early breakthrough moment, it was when...

At that point, the next steps had everything to do with really digging into the problem to understand how that gene does that. How can a gene be required to have something as complicated as a sleep/wake cycle take place? And what was required was many years of slogging away, isolating new mutations, discovering other genes that were working with that first gene, which was called period, that eventually snapped together like puzzle pieces to form a biological clock. . . .

Of course, the next breakthrough was not really ours; it was just when the rest of the field started becoming interested in what we’d done in fruit flies and went on to study their own systems, like mice or even humans, and found that the same genes that we found in fruit flies were found throughout the animal kingdom.

TS: What was your lab using as an indication of how the circadian rhythm was working?

MY: We were looking at the locomotor activity rhythm of the fly; that was our assay. When does the fly wake up, when does it go to sleep, and what is the periodicity of that activity? And then later we became interested in cycles that could be seen in many other tissues in the fly.

TS: What has resulted from your research, and this kind of research, either in your lab or beyond, that you couldn’t have anticipated in the ’80s or ’90s?

MY: We really didn’t imagine in the beginning that we would be sitting here today looking at genetic variations in the same genes that fruit flies have that cause sleep changes in humans. But here we are, looking at just that sort of thing. And, of course, another thing we didn’t realize at the time was that this clock would be represented all over the body in many different tissues and control so many different biological processes that we go through every day. It sort of left us with the understanding that really wasn’t there 30 or 40 years ago, that our whole bodies are rhythmically active.

TS: Which part of the fruit fly body were you originally looking at—just the brain?

We really didn’t imagine in the beginning that we would be sitting here today looking at genetic variations in the same genes that fruit flies have that cause sleep changes in humans. But here we are.

TS: What research are you working on now that you’re most excited about?

MY: Well, we’re very interested in sleep, not only the pattern of sleep, which we’ve been studying, but also the regulation of sleep—how is the amount of sleep we get each night regulated? And we’re interested in that very tough problem: “What is sleep for?” and we’re using fruit flies to look at that.

The other thing that we’re looking at is human biology. We’re very interested, with all the new DNA information that is available, in looking at variations that occur in humans and human chromosomes that can lead to changes in these genes and especially changes that indicate that they would have an effect on the workings of these clocks, because we feel these may be involved in patterns of sleep and other rhythmic activities. And they could be involved in other kinds of medical issues, ranging from psychiatric disease to metabolic disease.

TS: What are doctors and the public failing to appreciate about how the circadian clock relates to health, disease, and diet?

MY: I think the biggest lack of understanding right now is that we really are rhythmic, biologically, and that those rhythms are very important to the smooth working of the human body, and every animal’s body. . . . In this society and in many society’s today, the need for sleep is, people feel like they can just do without it—skip meals, skip sleeping, don’t care about what time of day you’re eating and sleeping. These are things that will disrupt that rhythmicity, that coherent rhythmicity throughout the body. And from experiments ongoing in animals, model organism studies, all of these things produce deficits in health.

TS: When you first started working on the period gene, how long did your experiments take, and how long would they take now with today’s technology? I imagine it would be much faster.

MY: For example, when we first started to isolate a gene, the isolation of a gene in the 1970s would take many months or a year or possibly more than a year from the time you started to attack it, even in a fruit fly. There were tricks that were showing up that would speed the process along, but it was a laborious project to get achieved. Today, all the genes are known because we’ve sequenced Drosophila; we’ve sequenced humans. We know where the genes are. We know their composition.

TS: Did you see the Nobel coming?

MY: No. A few years ago, we got a number of prizes, and everybody would say, you know, ‘Hey, you’re up for this,’ but things got quiet for a few years, and so this was quite a surprise. It’s such a rare honor, there’s so much tremendous science being done in medicine and physiology these days, that these things can’t be predicted. I don’t think anyone can be confident that they’re going to receive this kind of an honor.

TS: When they called this morning, what time was it, and had you heard the news from someone else, like your colleagues, or was it a complete surprise?

MY: I think they tried to call us around 5:30 in the morning here in New York. My wife is saying maybe even earlier, but we didn’t get those calls because they were going to a phone that was plugged into an answering machine out in our kitchen, and we were sleeping at another end of the house. So I never heard the phone ring. Luckily, the president of the university called me on my cell phone a few minutes after the announcement to let me know what was happening, and that’s how I heard about it. And it’s been head-spinning ever since.