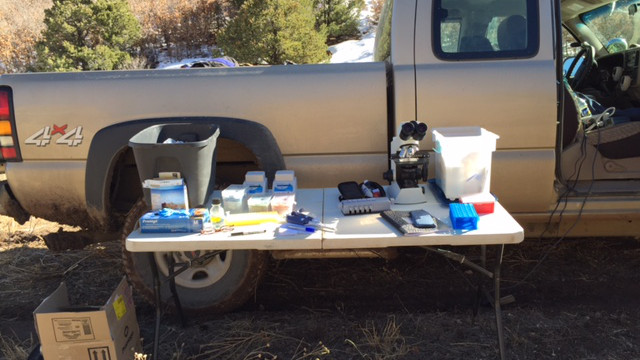 A field set-up for LAMP assays has been used to screen for pneumonia in bighorn sheep and could aid in Zika detection.CONNIE BREWSTERTrapping and testing mosquitoes to monitor circulating Zika virus could become more rapid and cost efficient, according to researchers who described a new technique in Science Translational Medicine today (May 3). The assay, which is based on loop-mediated isothermal amplification (LAMP), can distinguish between Asian and African strains of the virus and, in theory, could be used for virus detection directly from mosquitoes in the field.

“You can just simply take mosquitoes and grind them up, or take blood samples and other types of samples from infected humans and directly look for the presence of Zika,” said Richard Kuhn of Purdue University in Indiana who was not involved in the work. “You don’t have to do [RNA] purification, you don’t have to do reverse transcription, so...

The approach enables “testing in remote settings without the need for fancy, expensive equipment,” added Desiree LaBeaud of Stanford University who also did not participate in the research. “It could be useful for vector surveillance and also clinical diagnosis.”

Infection with Zika virus generally causes a short febrile illness, or is asymptomatic. But the virus has also been linked to Guillain-Barré syndrome and other neurological issues in adults, as well as with fetal microcephaly and other congenital problems if pregnant women are exposed.

Although Zika was first identified in humans in Africa in 1952, it wasn’t until the recent outbreak of an Asian strain of the virus in Southern and Central America that the link to microcephaly was determined. The Asian strain has significant sequence differences from the African strain, which may have altered its virulence, pathology, or transmission efficiency. With the Asian strain now spreading far and wide, and possibly extending into the African strain’s territory, distinguishing the two may become all the more important.

Zika virus in mosquitoes or humans is typically detected in a laboratory using a reverse-transcription polymerase chain reaction (RT-PCR). However, as infections emerge in new locations, the tasks of surveilling mosquitoes, performing diagnoses, and identifying the strains would be made simpler with a cheap and easy field assay, said Joel Rovnak of Colorado State University who led the new study. And he had a bright idea how to make one. “We had already been developing a [field-based] LAMP assay . . . to detect pneumonia organisms in bighorn sheep,” he said. “And so I suggested we apply [it] to Zika.”

Like PCR, LAMP amplifies target DNA sequences using sequence-matched primers. But unlike PCR, which requires continuous cycling of the reagent mix through different temperatures, LAMP proceeds at a constant 63° C. This means that instead of buying a PCR thermal cycler machine, which “ranges from $15,000 to $20,000,” said Rovnak, “We paid $250 for a heat block.”

Eliminating the reverse transcription step and using a simple heat block, which “we plug into a truck battery,” said Rovnak, would certainly make the assay cheaper and more mobile than RT-PCR. But, what about isolating the RNA in the first place? Rovnak had a simple, field-friendly fix for that too.

“Twenty years ago, I had begun doing RT-PCR on simple cell lysates,” said Rovnak, “so I knew that essentially you do not have to isolate RNA from samples in order to proceed to amplification.” Sure enough, by simply squishing Zika-infested mosquitoes, adding them to tubes containing LAMP reagents, and incubating the slurry at 63° C, the team could robustly amplify the virus (correctly identifying 15 out of 15 infected insects and 3 out of 3 negative controls).

Although the team hasn’t as yet performed the assay on mosquitoes in the field, all the components are in place to do so, said Rovnak. The researchers also showed that they could distinguish African and Asian Zika strains directly from infected cells.

With a view to using the assay for patient diagnoses, the team went on to amplify the Asian strain straight from plasma, serum, and semen samples from infected individuals—though this produced some false positives and negatives that Rovnak said was due to “ill-defined inhibitory substances.”

The LAMP approach would need considerably more development before it could become a diagnostic tool, said Rovnak, but encouragingly it is as robust, accurate, and sensitive as RT-PCR, yet reagents cost “about half.”